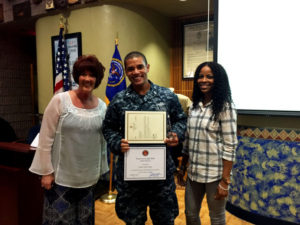 Josh and Nicholas have been matched for a little over a year, and over that time, Josh has played an integral role in his Little Brother’s life. Despite Josh’s hectic military schedule, he always found time to be a consistent role model to Nicholas.

Josh recently told his case manager, “Nicholas is the best Little Brother one could wish for, we are practically inseparable and make an awesome team.”

They typically get together on Sundays, and some of their outings include: shopping and learning about different foods at the Asian Market, playing basketball, volunteering at a car wash, being road guards at 5k marathon, playing video games, watching movies at the base theater, and of course school work at Barnes and Nobles.

Josh has also introduced Nicholas to his Japanese culture by having him eat sushi for the first time, which he now loves, and teaching him how to speak in Japanese. During the past school year, whenever Nicholas became discouraged with his grades, he can always count on Josh for encouragement.

Josh has shared about his own experiences about going from C’s to straight A’s, and has told him if he can do it, then he can also. Josh has encouraged Nicholas to make a great first impression with his teachers during the first week of school, and also has given him great advice on how to behave in school and around others.

Nicholas’ mom told their case manager, “Nicholas is always excited and looks forward to Josh’s visits. He talks about their outings all week, he’s always smiling and even made the comment ‘I am going to have a good night sleep’ after one of their outings”.

She likes that Nicholas listens and respects Josh. Josh has spoken/corrected Nicholas in front of his mom, and she commented that she really appreciated that because she can see they are on the same page with doing what is best for Nicholas. Josh has taught Nicholas three main things that would ensure him success in life: family first, attitude, and academics. Nicholas’ mom likes that Josh sets a great example for her son, by putting his wife first before everything or everyone else.

They end every outing with a mentoring summary on how to boost self-esteem and how to be a good person. Some goals and special projects they are currently working on are leadership development, teamwork, building skills and a plan of action for this year’s curriculum in school.

Josh has also been very helpful in our “100 Men 100 Days” recruitment campaign, by recruiting other men to volunteer and become Big Brothers.

Because of the role Josh has played in his Little Brother’s life and because of the wonderful impact he has made, we are honored to have Josh as our “ 2014-2015 Military Big of the Year”.

The Ron Mobayed Award was established as a memorial to the life of Lt. Ronald Joseph Mobayed, who was an outstanding Big Brother while he was stationed in Pensacola for flight training in the early 1990’s. Tragically, Ron and his crew were killed in the line of duty on October 3, 1995. This award is presented to pay tribute to our Military Volunteers in honor of Ron’s love and dedication to the Military Armed Forces, and is awarded to the Big who exemplifies the spirit of Ron through their commitment to their Little, to the Big Brothers Big Sisters agency, and to the children of our community.