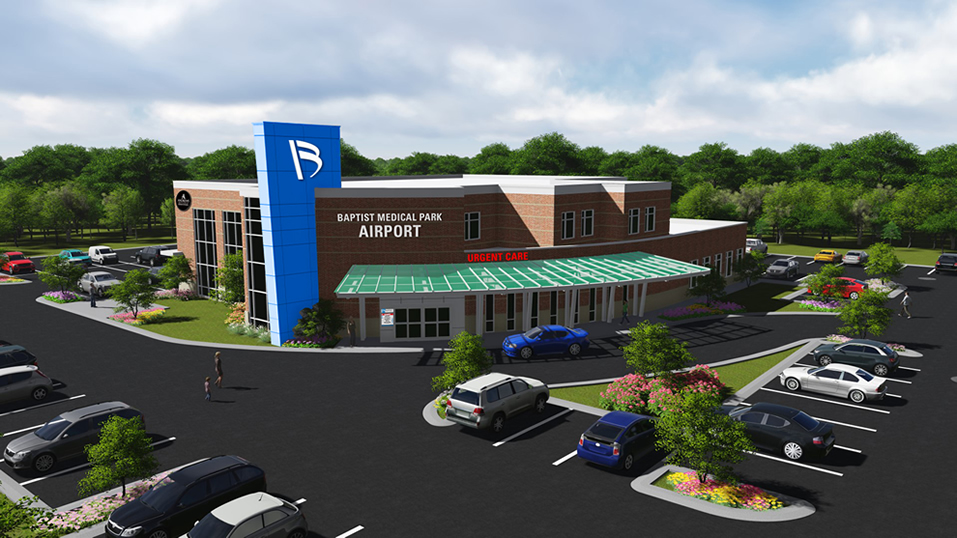 Yesterday, Baptist Hospital announced a new $6-million investment in the commerce park at the entrance to the Pensacola International Airport.

The 24,360 sq. ft. building will be the second the tenant for the Pensacola International Airport Commerce Park, that opened in 2013 with the Hyatt Place Pensacola.

The developer is Catalyst CRE, the contractor is Williams-Brown, and the architect is George Koper Associates.

The groundbreaking came a day after Baptist revealed its plans to revitalize the neighborhood surrounding its main campus on West Moreno Street.

Baptist Health Care plans to redevelop about two blocks or six acres of its property south of its main hospital on E Street.

The land is seen as a possible catalyst for West Side revitalization in the poor, rundown neighborhood, which includes Morris Court and other nearby affordable housing.

Baptist is teaming with the city and county on the redevelopment project. Ideas for the site unveiled Monday include:

Martz said the company, which began the West Moreno District project in 2014, plans to hold another public meeting at the end of March to reveal more detailed plans for the redevelopment. He admitted the location does have stormwater runoff issues.

“You want a nice entrance to your house,” Martz said. “Hopefully, this can start to affect change in the community and lead to different perceptions people might have of this part of town. I hope it starts a pattern of reinvestment here on the West side.”

“I like that you are not trying to displace residents,” he said. “You want to keep the community involved, which I think is good.”

For the city of Pensacola, these are two nice wins. The airport commerce park gets a new tenant and the westside of Pensacola gets a facelift.