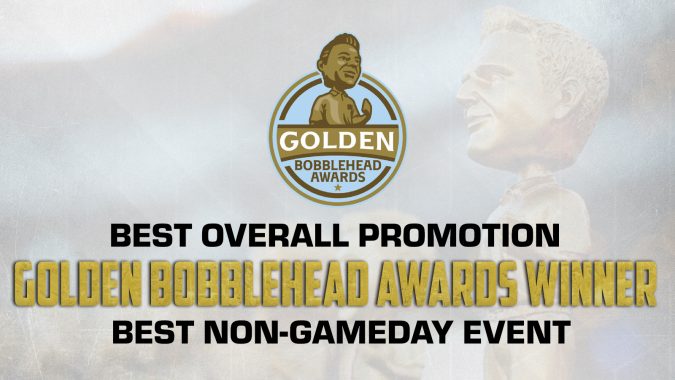 Minor League Baseball announced at Wednesday’s Innovator Summit that the Pensacola Blue Wahoos have been selected as the Golden Bobblehead Award winner for both the “Best Non-Gameday Event” and “Best Overall Promotion” of 2020 for their innovative first-of-its-kind ballpark Airbnb.

“It is a huge honor for the Blue Wahoos to win two Golden Bobbleheads this year,” team president Jonathan Griffith said. “In our nine seasons, we’ve never taken home a Golden Bobblehead, and we couldn’t be more proud of all the staff that worked so hard to make the Airbnb successful. The Airbnb, besides generating revenue that has allowed us to keep all of our staff employed throughout the year, has brought so much great attention, media coverage, and new tourists to the city of Pensacola while creating unforgettable memories for baseball fans from all over America.”

Given annually by Minor League Baseball for the most creative and successful promotions held by teams each year, the Golden Bobbleheads are considered the Minor Leagues’ most prestigious awards.

The Blue Wahoos listed their full stadium on Airbnb in May, the first time a sports stadium has ever been offered on the vacation rental app. Within 48 hours, two full months of stays had sold out. The listing received both national and international acclaim, being featured in over 350 media outlets across the globe including coverage in six foreign countries on four continents. To date, guests have traveled to Pensacola from 16 states across America to stay in the Airbnb.

The Airbnb experience includes private access to the playing field at Blue Wahoos Stadium for guests including a batting practice set-up that includes bats, balls, and helmets. The players’ clubhouse at Blue Wahoos Stadium is also available to guests for private use, giving fans never before offered behind the scenes access to areas of the stadium typically only reserved for professional ballplayers. The players’ dining room at the stadium has been converted into a comfortable bedroom with 10 beds for guests. Larger groups can also utilize the visiting clubhouse at the ballpark, which holds an additional 10 beds. Guests also have exclusive access to the stadium’s batting cage for the entirety of their stay.

The Blue Wahoos Stadium Airbnb holds a perfect five-star rating on Airbnb’s website. The team recently opened available dates throughout the fall (September-December) for guests to book their stay.

The 2020 Golden Bobblehead Award winners are as follows: