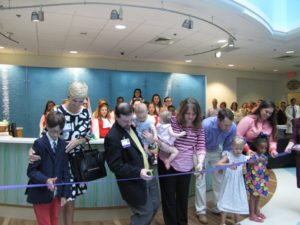 Press Release: More children from across the region will have access to specialized pediatric care, thanks to the Bubba Watson Foundation, which was founded by the eight-time PGA Tour winner and two-time Masters Champion. Watson’s annual charity event Bubba Bash raised $100,000 for the new Children’s Hospital at Sacred Heart.

In September, Sacred Heart announced plans to care for a new generation of children with construction of a new five-story Children’s Hospital, along with a major expansion to women’s services.
The Children’s Hospital at Sacred Heart is the region’s only children’s hospital, serving families across Northwest Florida, South Alabama and South Georgia. The expanded Children’s Hospital will allow the hospital to provide care for more children, increase access to specialized pediatric and maternity care and consolidate pediatric services in one convenient location.

“We are very excited to support the expansion of The Children’s Hospital at Sacred Heart,” said Watson. “It’s a special place. Like a lot of people in this area, I was born there myself. As a parent, I love the idea that the expansion will ensure world-class health care continues to be available in our community for generations to come. I hope other people will support the cause too. Even if you don’t have young children, you probably have friends, family and co-workers who are impacted by The Children’s Hospital every day.”

Construction of the new Children’s Hospital is expected to begin in early 2016 and be completed in late 2017.

This year marked the fourth annual Bubba Bash and the first time this event was held in Watson’s hometown of Pensacola. Bubba Bash was held on Saturday, October 24 at the Pensacola Bay Center. This year’s event was headlined by Rascal Flatts with a special appearance by celebrity guest and “Duck Dynasty” star Jase Robertson along with musical guests Rhett Walker Band and Reed Robertson.
For more information about The Children’s Hospital at Sacred Heart, visit www.sacred-heart.org/childrenshospital.