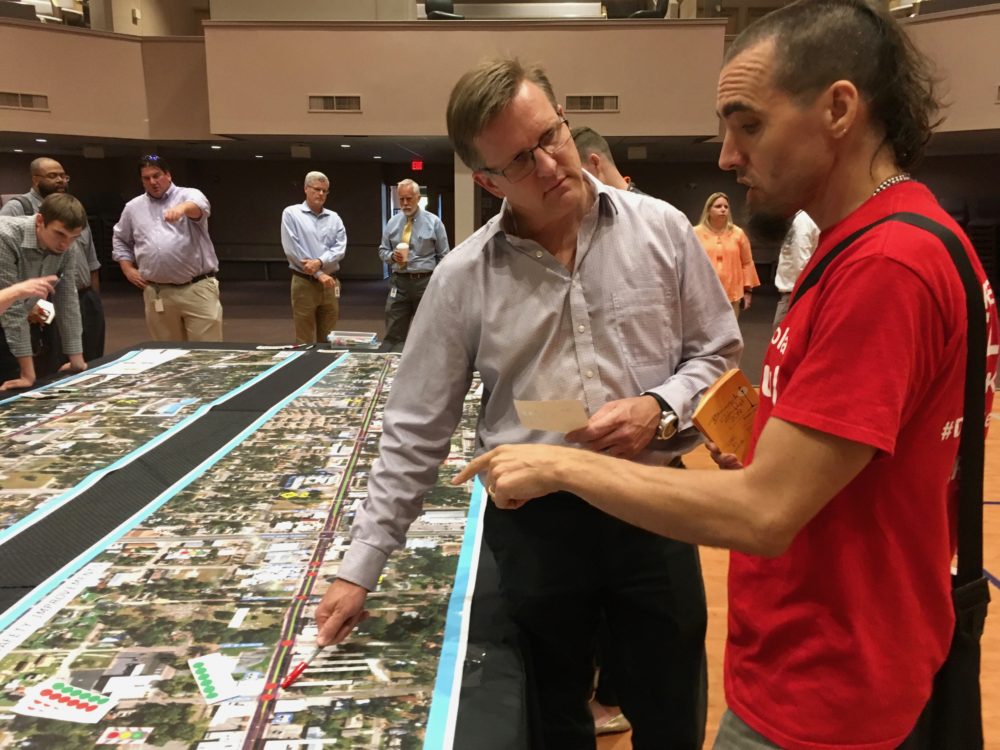 Laid out along a long table is a bird’s-eye satellite image of West Cervantes Street depicting potential safety improvements planned for the corridor. Brownsville resident Mike Kilmer was focused on a bright orange line running down the middle of the street, representing a barrier to prevent people from crossing in undesignated areas.

“You might have to walk a block and a half to get from Fish and Grits to the Army Navy Store,” Kilmer pointed out, before recalculating. “No, actually, that’d be three blocks to get across the street.”

This pedestrian safety barrier is but one aspect of potential safety improvements slated for West Cervantes. The improvements — which also include crosswalks and crossing signals — were unveiled by the Florida Department of Transportation during a public meeting at the Brownsville Community Center Tuesday evening.

The meeting this week serves as the beginning of a conversation. FDOT is looking for public feedback on its plans for West Cervantes. The department wants to know how people who use the street feel about the improvements aimed at making the route safer for both pedestrians and drivers.

Dubbed the West Cervantes Pedestrian Safety Plan, these improvements are a collaborative effort between FDOT, the city of Pensacola, Escambia County and the Florida Transportation Planning Organization (TPO). The $7.5 million project encompasses 2.3 miles of roadway — from Dominguez Street to A Street — and work is expected to begin in the fall of 2020.

In the plans designed and presented by FDOT Tuesday, improvements include reducing lanes from 12 feet to 10 feet and adding a median in between. The plans also include crosswalks, along with accompanying crossing signals, along the corridor. In the expanses between these crosswalks, which stretch for blocks, the medians feature barriers installed to prevent pedestrians from crossing the street.

While the barriers do prevent pedestrians from crossing the street, they also present some challenges. Drivers, for example, will no longer be able to cross freely on cross streets from one side of Cervantes to the other, but will rather have to travel to an intersection featuring a break in the barrier.

“I’m thinking about how are people gonna get to the Elbow Room?” asked Jonathan Owens, noting that a pedestrian barrier makes it difficult for drivers in the opposite lane to enter his Cervantes-street establishment. “That’s not just me, that’s any of these businesses.”

Running his finger along the map’s orange line depicting the pedestrian barrier, Owens — who also serves as the assistant to Escambia County Commissioner Doug Underhill — points out how the area’s grid-street system would be broken up by the divide.

“There’s a reason why the streets are gridded. You’re eliminating the grid,” he said. “It makes it less walkable.”

This was a common sentiment. FDOT equipped attendees to Tuesday’s meeting with green and red circle stickers, to be placed respectively on areas of the map where they found improvements they liked, as well as ones they did not favor; the red stickers quickly lined Cervantes, placed at pretty much each intersection where the pedestrian barrier blocked passage.

Pensacola City Councilman Jarad Moore, who said he was excited about the safety project, leaned in for a closer look at FDOT’s map and absorbed the red stickers lining the street.

“It’s never an easy solution is it,” the councilman said, explaining that he looked forward to this public input phase of the process — “where we polish the idea.”

Drew Buchanan, who studied walkability and connectivity issues as a member of Pensacola Mayor Grover Robinson’s transition team, said he was also overall excited about the West Cervantes project — “the fact that we’re doing this and it got funded, that’s a win already” — but also expressed some reservations about the street grid being broken up — “that’s what makes Brownsville so special, I think” — and the long stretches of the corridor without crossing options.

Satter said he recognizes concerns about preserving the street grid and about the impacts to businesses in the area — “you have to balance everything” — but that “safety is always going to take the priority.”

“This is safety, safety, safety,” Satter said, explaining that FDOT’s primary objective is improving safety, minimizing the pedestrian-vehicular accidents along the corridor.

FDOT will be hosting a second meeting to gather public input on the West Cervantes safety improvements on August 13, from 2 to 4 p.m. at the Fricker Community Center. The public will also have a chance to formally comment at a meeting slated for this fall as well.