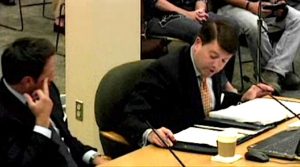 When the Radio Tower Lease was brought before the Pensacola City Council in May 2012, City Administrator Bill Reynolds failed to mention that the old radio tower was in a conservation district as a non-conforming use. Instead, he dances around the issue and tells the council that the Public Works Department has told him that the only use for the property is for a radio tower…without explaining that the old tower was a grandfathered structure.

Reynolds did not tell the council that the city’s zoning prevented the construction of a new tower. The council passed the lease as a consent agenda item three days later without discussion.

Here is the video of the Committee of the Whole – start around the 21:28 mark: