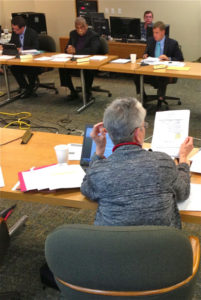 Mayor Ashton Hayward made his proposed budget available last month. The budget must get council’s approval and be presented at two public hearings in September prior to being adopted by October, the start of the fiscal year.

Council has scheduled budget workshops for today, tomorrow and Wednesday, if necessary. Each session will focus on specific areas of the proposed budget.

Today, council members will get an introduction to the document and cover Pensacola Energy and the Port of Pensacola before breaking for lunch. In the afternoon, they are scheduled to go over Sanitation Services and Fleet Management; Pensacola International Airport; Fire; and Police. The day will close with an open forum.

Each budget workshop begins at 9 a.m. at Pensacola City Hall.

Mayor Hayward has also called a special meeting of the city council for Tuesday at 8:45 a.m. The meeting will immediately precede that day’s budget workshop and will pertain to the acceptance of a gas distribution franchise ordinance from Escambia County. This is required housekeeping related to a December 2012 decision by council to approve an agreement that provides for the transfer of Pensacola Energy’s Pensacola Beach franchise area to the city of Gulf Breeze for the total sum of $470,000.