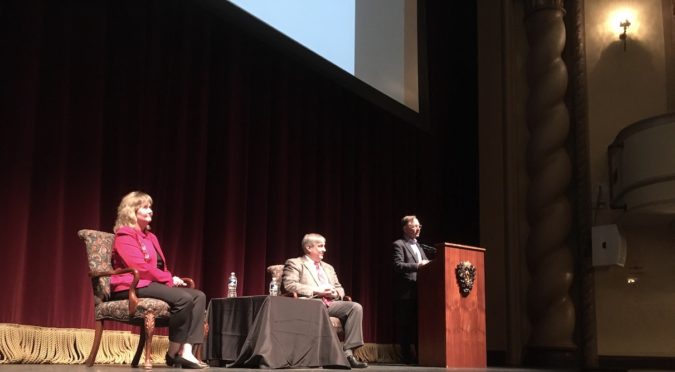 As part of the first CivicCon event of the year, Pensacola Mayor Grover Robinson and Escambia County Administrator Janice Gilley each provided updates and projections for the city and county.

Each presentation was allotted 25 minutes, with Robinson going first and Gilley following. Afterwards, the local government officials also participated in a question-and-answer with those in attendance Jan. 27 at the Saenger Theatre.

Mayor Robinson’s presentation focused on accomplishments over the past year, as well as laying out a vision for 2020.

“I think we have so much momentum, and things going positive for us,” he said, before introducing the CivicCon crowd to the city’s recently formalized mission statement of providing the “highest quality of life.”

Mayor Robinson next laid out a series of accomplished or at least embarked-upon goals — established during the transition team process shortly after he took office last year — including conducting an employee engagement survey and formulate succession plans for key roles within the city.

Other accomplishments touted by Mayor Robinson included improvements to a mile and a half of city sidewalks, replacement of city gas pipes, increased training for police officers and bringing an aviation maintanance-repair-overhaul (MRO) facility to the Pensacola International Airport.

The city’s airport, in general, also received some spotlight.

“That airport is growing all the time, and every month we’re seeing new records set upon new records,” Robinson said, noting that the facility’s parking garage, and perhaps even terminal, were due for expansions. “We’re looking to expand what’s happening at the Pensacola International Airport an to make it better.”

Robinson also highlighted upcoming municipal efforts and activities. He pointed to a workshop in February where the Pensacola City Council plans to mull the best way to spend $17 million within the downtown urban core, as well as improvements coming to Garden Street. He also discussed a road diet slated for Spring Street and a roundabout to calm traffic on Langley Avenue.

The mayor also spoke a bit about the Florida Department of Transportation’s plans to make safety improvement along West Cervantes Street. The planned work has been criticized by local officials for cutting off the street grid and its lack of focus on pedestrians.

“It certainly was not perfect,” Robinson said FDOT’s plans.

But, the mayor continued, he believes that the state is open to discussing a road diet for the area — viewed as a more pedestrian-centric option — just not yet. The problem is, he explained, the road diet concept has yet to be listed in the city’s priorities and submitted to the regional transportation planning agency.

“You’re looking more at 7, 8 years,” Robinson said of a realistic timeframe for the road diet plans. “I think that’s going to be too long to tell the people on Cervantes that there’ll be no safety improvements.”

Gilley, on the job as Escambia’s top administration official for about half a year now, began her presentation with a key word: ‘place.’

Gilley continued, stressing the importance of ‘place’ in providing a community with a common bond.

“Place is what is connecting us. And that connection is whether you were born here, or you’re a newer resident, whether you were assigned here, dragged here or you chose here, you’re here, this is your place,” she said.

Gilley said that she intended to contribute to this ‘place’ by focusing on county efforts. To begin with, she’s focusing on “people, policy, process and plans.”

In addition to listing off some county goals — including items like improving customer service and restoring public trust — and county accomplishments, like maintaining infrastructure and workforce development efforts, Gilley also nodded toward the elephant in the Saenger: she was brought on board to put out fires, as the county was in the midst of a mass of high level resignations and a state investigation into its Emergency Medical Services.

“I literally spend 6 to 10 hours a week reading resumes, and one of the things I find very encouraging is that a lot of people want to come and work in our community,” Gilley said, naming some recently filled positions, like EMS and Emergency Management directors, and also some she’s looking to fill, like assistant county administrator.

The first question presented to both Robinson and Gilley, pertained to the potential for consolidating city and county services.

Robinson said he understood some benefits associated with the concept, but that he doubted there was an appetite for consolidation at the city: “At this particular time I don’t think politically were at that particular space where that’s going to happen. I certainly think it’s challenging in good economic times, it’s more something you see communities come to when they either have some kind of an ethics scandal or challenging economic times.”

Gilley was more open to the concept: “I don’t think everybody should be afraid of a consolidated from a theoretical standpoint, or a conversation, I think that it always brings out healthy conversation and dialogue whenever we have it.”

Affordable housing, as well as homelessness were the next topics tackled. The city and the county have been in discussions for about a year now on how to address the issue of homelessness, and more recently began to discuss coordinated affordable housing efforts.

On the affordable housing front, the Mayor mentioned the city’s goal of forming a task force and aiming to create 500 units of affordable housing within five years. Both he and Gilley talked about the possibility of using county-owned parcels on which to locate such units.

Insofar as the issue of homelessness, it appears the city and county are at odds over how much each entity should pay to fund a day center geared toward housing various organizations that provide services to the homeless community.

“I like the day center, I’m willing to do that, but again, we’re simply a 25 percent partner, we have to work with the county,” Robinson said.

“The mayor continues to push for a homeless day center, which I think is a great idea,” Gilley said. “I think that managing that day center is where we kinda continue to go back and forth.”

Gilley also addressed the potential of placing a roundabout on Pensacola Beach’s main intersection to alleviate congestion. She said the plan — projected to cost about $10 million — lacks support from county commissioners, who would need to vote to provide funding.

“I would need the commission to be supportive in terms of us putting it out for a bid,” Gilley said. “When you’re doing the budget, it’s one thing to have great ideas, but if you don’t have the money to fund them, that kind of puts you in a pickle.”

Other questions asked of Robinson and Gilley pertained to environmental efforts, economic development and the chance of getting a hiking and biking trail along Scenic Highway.

Near the end of the Q&A session, Gilley again addressed the challenges encountered recently at the county, listed some changes on the horizon — like contracting out medical billing and providing the same level of training to both firefighters and EMS employees — and also offered a word of support for employees working in the public safety sector, which has come under scrutiny in light of the state investigation.

“There are a lot of amazing people that are riding in those trucks every single day to protect you, to take care of you, they’re right at the end of the 911 call for you, so I hope that you will understand that there may be some bumps in the road with a coupe of issues,” Gilley said, “but it’s not the majority of the employees that we have working in public safety.”