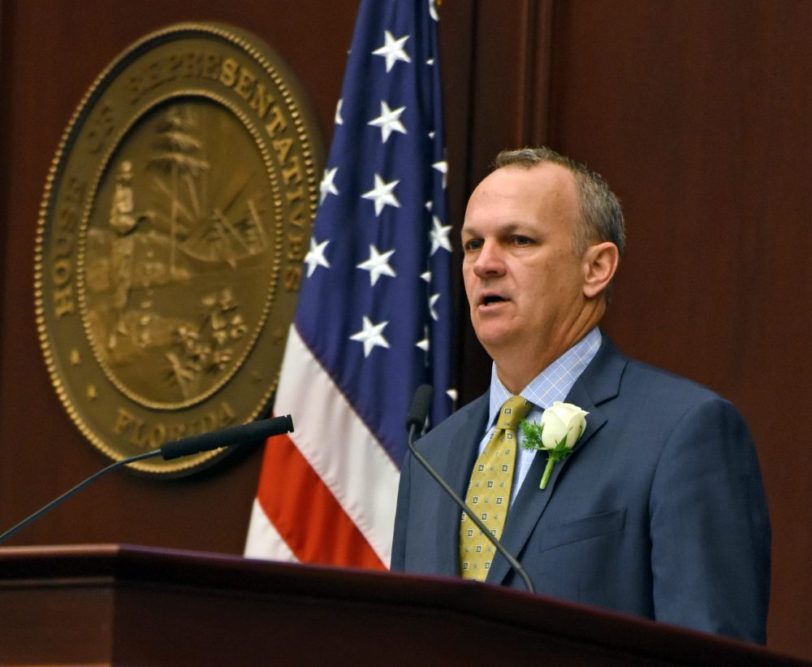 Florida House Speaker Richard Corcoran isn’t afraid to challenge Gov. Rick Scott. And he didn’t shy away from the opportunity to speak before the Panhandle Tiger Bay Club, even though Escambia County is home to Navy Federal Credit Union and VT-MAE, poster children for Scott’s business incentive programs.

The Speaker explained his position on Enterprise Florida (EFI).

“All of us at this table have been accused of hating Florida, hating beaches, hating the hotels, hating tourists, and I just want to clear the air,” he said.

Two years ago, the House leadership began to look at the operations of Enterprise Florida and Visit Florida, which were viewed nationwide as paragons of how public-private partnerships work between the government and the private sector in tourism and economic development.

According to Corcoran, they discovered that 18 of EFI’s 26 programs were losing money for taxpayers. He said, “We found out that out of 234 incentive programs 124 were failing. And of those 124, what was promised in jobs and what was promised in capital investment ended up being less than two-percent in both categories.”

The House found that some EFI board members benefited from the agency’s initiatives.

When the companies failed to make the investments or create the jobs mandated in the EFI contracts, officials amended the agreements. The Speaker said Lockheed Martin agreed to create 305 jobs but only has delivered six. EFI allowed Johnson and Johnson to take $18 million off of its agreed-upon capital investment.

“It’s an absolute cesspool, and it’s taxpayers’ money, and then we go out there, and we say it’s a public-private partnership,” said Corcoran. “Let me tell you something; there is nothing, nothing private about these industries.”

He doesn’t believe the corporate incentive programs can be fixed.

“When we shined a spotlight, what happens?” he asked. “The executive director resigns, people are in an uproar and say we need to reform the whole system. It’s unreformable.”

Corcoran added, “And you know what has done more to lift more people out of poverty than any other thing, any other system in the history of mankind? A true, fair and just free market system that allows anyone to enter and compete on fair grounds.”

The full story on Corcoran’s visit to Pensacola is in this week’s issue of Inweekly, which goes live at 4 p.m. today.

1 thought on “Corcoran faces the Tiger”