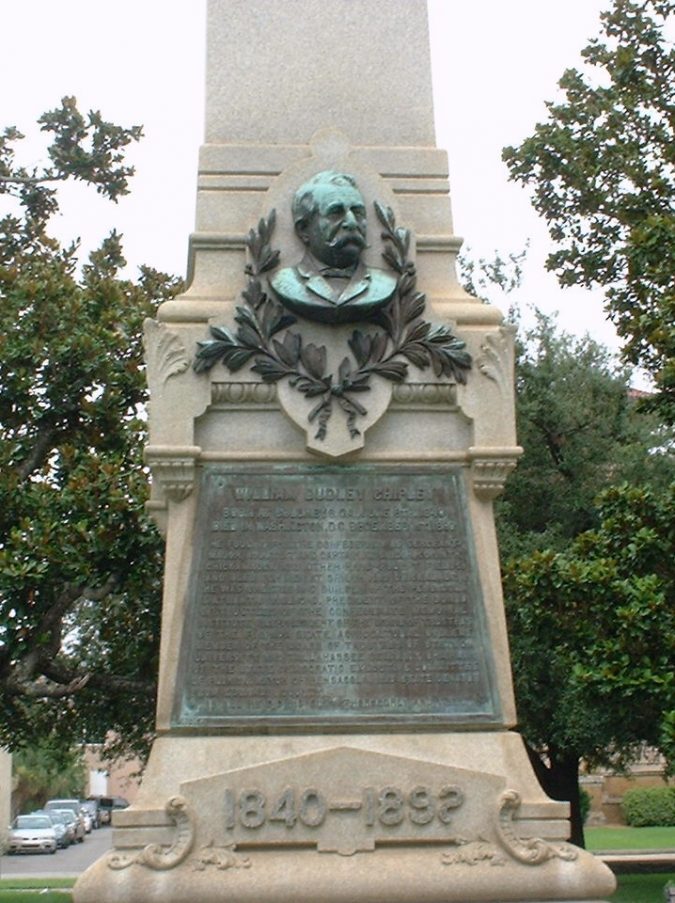 City Councilwoman Sherri Myers has an add-on for the council’s agenda, but she will need five votes to get on the agenda for Thursday, May 13.

I wrote about him last June – The Man Behind the Monument.

RECOMMENDATION: That the city council direct the council executive to work with the Mayor’s office to develop a plan to remove the obelisk to William Dudley Chipley that stands in the middle of Plaza Ferdinand, and that the remaining balance in the unallocated general fund be appropriate to accomplish the removal. Further, that a supplemental budget resolution be submitted to the next city council meeting.

(b)Before 1985, Plaza Ferdinand was the primary park used for special events in the city. Beginning in 1983, as part of the City’s Directions ’85 program, Plaza Ferdinand was completely renovated. Those renovations included restoration of the fountain, rebuilding of the sidewalks, rebuilding of the ballast walls along the perimeter of the park, restoration and renovation of the obelisk in the center of the park, a commemorative bust of Andrew Jackson, and restoration of the commemorative cannons in the park. The renovations cost approximately $254,000.00.

An obelisk to William Dudley Chipley stands as prominently in the town square of Pensacola at Plaza Ferdinand as the Confederate monument once stood atop Palafox Street overlooking downtown Pensacola. While monuments and symbols to white supremacy are being removed from public spaces, the obelisk to William Dudley Chipley still stands proudly in the very middle of downtown Pensacola in Plaza Ferdinand VII

William Dudley Chipley, while not a native of Pensacola and not buried here, is memorialized with an obelisk that tells of his great achievements as a railroad developer, but Chipley’s dark past as a Confederate, Klansman and a murderer have been erased from public view.

William Dudley Chipley, was born June 6, 1940 in Columbus, Georgia.  He was born into a prominent white southern family.  Chipley joined and fought in the Confederacy during the Civil War. After the Civil War Chipley joined the Ku Klux Klan of Columbus, Georgia.  During this time the Radial Republican Party held political power in Georgia and sought to advance the rights of former enslaved African Americans.  The Radical Republican Party was responsible for the passage of the thirteenth Amendment to the US Constitution that abolished slavery.

On March 31, 1868, William Dudley Chipley, along with other Klan members, entered the home of Judge George W. Ashburn, a prominent advocate of reconstruction and member of the Radial Republican Party, and assassinated Ashburn after the KKK warned Ashburn that he was to cease fighting on behalf of formerly enslaved people. George Ashburn was the first person in Georgia to be assassinated and murdered by the KKK.

William Dudley Chipley was charged with the murder of George W. Ashburn and tried in a military court as Georgia was not part of the Union, having seceded to join the Confederacy. Chipley’s murder trial lawyer was the infamous Alexander Stevens, vice president of the Confederacy and author of the Corner Stone Speech wherein Stevens asserts that the purpose of the Confederacy was to defend the institution of slavery and white supremacy.

By an ironic twist of fate, Chipley and the other Klan members charged with Ashburn’s murder were never convicted of the murder.  On July 15, 1890, Georgia was readmitted to the Union and military trials ended before Chipley’s trial was completed.

Plaza Ferdinand should be an inclusive and truthful people’s space. That can only happen with the just removal of the William Dudley Chipley obelisk – a monument to white supremacy.

This add-on item is necessary and timely to preserve the unallocated funds in the general fund for a use that is necessary to address historic and systemic racism in the preservation of Pensacola’s history.