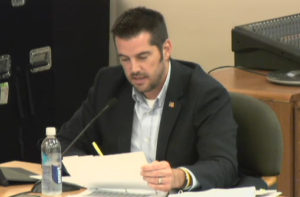 Pensacola City Council’s Wednesday night budget workshop was a three-hour stew of questions and numbers, with primarily two council members — Sherri Myers and Charles Bare — fleshing out financial particulars with city staff while also laying out their positions on issues ranging from the use of recreational practice fields, to the city’s tree fund, to travel expenditures, to just how great Ballet Pensacola’s production of “The Nutcracker” is.

“If council would like to go tab by tab, or item by item, all the departments are represented here,” Pensacola Chief Financial Officer Dick Barker opened the workshop.

This week’s budget workshop follows two prior budget meetings over the summer. Councilwoman Myers pushed for the latest workshop during an initial budget hearing because she felt the prior occasions had not given council sufficient insight into the city’s budget; she and Bare were joined by only a few of their cohorts, with President Andy Terhaar, Councilman P.C. Wu and Councilwoman Jewell Cannada-Wynn in attendance.

The workshop consisted of each city department head appearing before the council members to answer questions about their departments’ individual budgets. This presented opportunities to express concerns about certain expenses: Myers felt purchasing heavy equipment with money from the city’s tree fund would be “just outrageous” and Bare thinks the Osceola Golf Course might be “a drain” on city finances.

Bare also questioned Pensacola Energy Director Don Suarez about the city’s aging natural gas infrastructure, connecting it to the revenues generated for the city by the utility.

“I’m concerned that we have $8 million dollars coming into our general fund to do whatever we want with,” the councilman said, “but we have these deficiencies we can’t do anything about.”

Toward the end of the evening, Myers dipped into Mayor Ashton Hayward’s budget. She questioned the dollar amounts designated for his ‘extra personal services’ — “what is that $150,000 for?” — as well as about $200,000 for ‘professional services.’

Barker explained that the money is used to hire various employees, such as an office manager and receptionist, as well as outside services including attorneys, lobbyists, consultants, social media management and advertisement purchases.

Myers suggested that she would be bringing forth a motion to the council that $75,000 should be moved from the mayor’s services budgets and into city council’s budget.
Before the workshop concluded, council also heard from a number of people connected to outside entities — mostly arts related — that receive some amount of funding from the city. They informed the council members present that they appreciate and benefit from said funding; much of the comments amounted to preaching to the choir, as council appeared sympathetic.

“I would like to see more funding [directed to the arts],” Myers said. “Perhaps someone will bring forth a budget amendment to do that.”

Council will resume its first public hearing for the 2016 budget next Wednesday, with a second hearing to follow before its final approval.