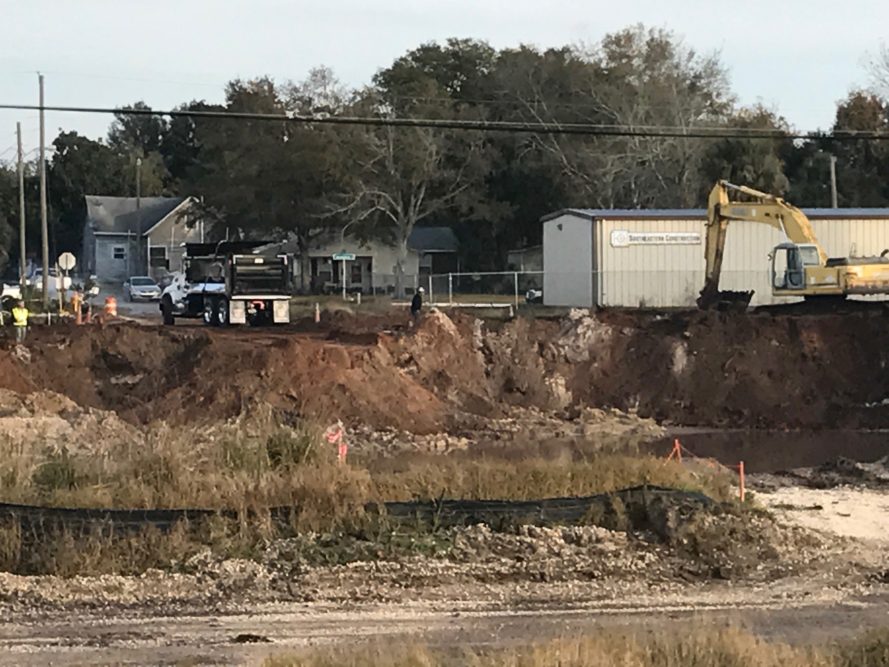 Escambia County Commissioner Doug Underhill has questions about the soil sample tested at the Government Street stormwater site in the Tanyard neighborhood. Mayor Ashton Hayward has insisted that the soil at the site is not contaminated. See Transparent Pensacola.

“The Corrine Jones Park property used to be residential until the 1980’s, and there is no data that I have seen that would lead me to suspect that the soil is contaminated or that it exceeds Florida Soil Cleanup Target Levels,” said Kirchenfeld. “In order to independently confirm the contractor’s September 27th soil result on this City project, and to test for additional contaminants of concern, we collected soil samples on 12/08/2016 and should have the lab results by next Wednesday the 14th.”

I also could not help but notice that the only sample tested is labeled “southwest portion of site”. As I recall from the Cameron Cole Plume map, the plume never reached the southwest portion of the site, but showed elevated levels at the northwest portion into the center. When I drove by there last week, much of the area that is shown on the plume map has been excavated well below the ground water level but the area in the “southwest portion” does not appear to be a part of the excavation.

Could you please provide a copy of the Cameron Cole plume map (or similar) with the sample site denoted on it, as well as some discussion about whether or not you think this is sufficient sampling to determine the extent of contamination of the soils that are being removed and put in unlined land fills in Escambia County. Specifically, I am interested in whether or not you think I should be comfortable with this testing as sufficient evidence that the soil being deposited in the landfills is in fact suitable for those fills.

Kirchenfeld responded, “Because there was only one soil sample collected by the City’s contractor back in September is precisely the reason why we collected additional soil samples last Thursday. We actually collected soil from the pile that is being trucked offsite.”

He also provided information that the Hayward Administration as yet to disclosed. The removal of the contaminated groundwater should be completed this week.

“The dewatering and filtration of groundwater should be completed by Wednesday also, and the equipment will be demobilized and moved off site,” Kirchenfeld wrote.

Underhill responded this morning, “I look forward to the results of the testing. It might be wise to go to the dump sites and pull some test samples as well. Let’s wait to see what our results look like on our current samples and we will consider next steps.”