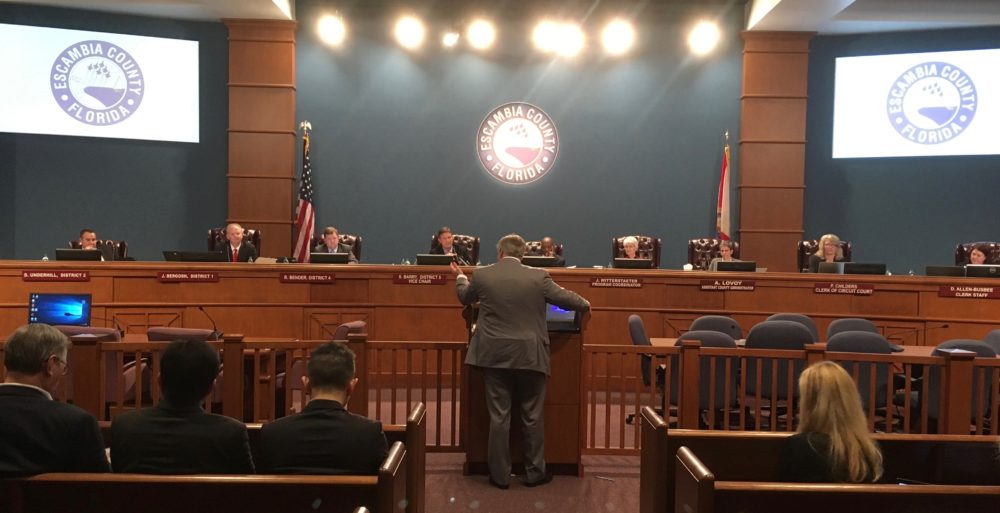 –Pensacola Mayor Grover Robinson secured an additional $5 million from Escambia County Thursday night for a jobs and infrastructure project at the airport.

The commitment was needed as the city attempts to get an additional $15 million Friday — on top of an existing $56 million commitment — from Triumph Gulf Coast, which oversees funds related to environmental penalties stemming from the 2010 oil spill.

Mayor Robinson addressed the county commission, as did officials from VT MAE, which is currently stationing its ST Aerospace manufacturing operations at the airport and hopes to expand operations as the city continues to build out its four-hangar, $210 million facilities.

Before the meeting, Bill Hafner, president of VT MAE, stressed to Inweekly that the securing of the needed funding this week — the $5 million from county, another $5 million from the city and the $15 million from Triumph — was necessary for ST to fully get down to business.

“The project can’t go forward until it’s fully funded,” Hafner said in the lobby outside the commission’s chambers.

Hafner said that ST has a board meeting next week in which the company will need to decided if Pensacola will be an appropriate site for the company to expand. The president said that the company was lining up a big client, a once-every-five-years type of client, though he wouldn’t divulge who, which requires the promise of the expanded facility.

“It’s a key factor,” Hafner said. “Obviously, if you don’t have the capacity they’re not going to consider you.”

While Hafner said ST would remain in town even if the city was unsuccessful in securing funds to move the larger project forward, the company would be unable to do the amount of work needed by the new client at the airport location: “It would be lost to Pensacola.”

Escambia officials were keen to kick in an additional $5 million, with the noted exception of Commission Doug Underhill. The dissenting commissioner took issue with the spending of Local Option Sales Tax funds on the project. He also claimed the project stood to drain funds from the state that could be better used locally.

The other four commissioners were on board to varying degrees. Commissioners Jeff Bergosh and Robert Bender stressed the potential for the “ripple effect” that injecting serious public funds into such a project could have, while Chairman Lumon May made clear that the project would need to involve minority hires.

At the tail end of lengthy debate on the issue, the commissioners hammered out a funding formula. The county will be taking $2.5 million from LOST funds, another $1.2 million of discretionary funding previously earmarked for Pensacola Beach, and then $1.3 million of RESTORE funding, which also stems from the 2010 oil spill fines.

Mayor Robinson today will be asking for additional funding from Triumph. Wrapping up all these various funding sources is necessary for the city to realize that $56 million from Triumph — the largest chunk of funding due the $210 million project — and keep ST on track at the airport.