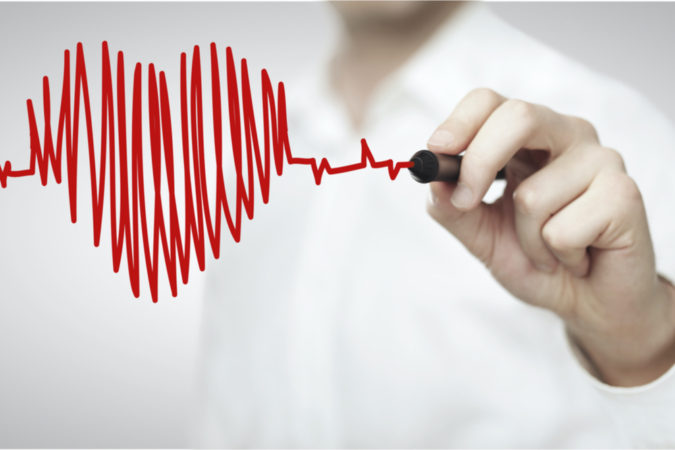 According to the latest data from DOH (6 p.m. April 6), Escambia County has two more COVID-19 cases tied to long-term care facilities, bringing the total to three. We had zero a week ago and our first on Friday. The state has refused to released the name of the facilities involved.

The EOC  reported yesterday to the county commissioners that there has been one death in an ALF (assisted living facility). That death will not show up on the DOH dashboard for one or two days.

Escambia Sheriff’s Officer reported to EOC:  “We have 21 employees self­-quarantining (Combination of civilian and sworn staff). No reported manpower shortages. No interruption to the response to calls for service. Front lobby of the Sheriff’s Office is closed until further notice. ​”

Hillcrest Baptist will begin sending volunteers to Feeding the Gulf Coast beginning 4/7 thru the end of the month to build capacity for warehouse/feeding site needs.

Recent actions the state has taken to respond to COVID-19:

The Overhill Chart tracks the new cases in Escambia each day of April, according to the latest DOH statistics. 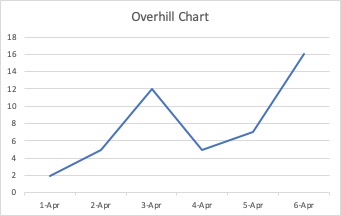 It’s difficult to track trends because of the lag time in getting results back from the labs. The number of positive cases jumped yesterday because the results from April 1, the heaviest sample collection day of last week, came back.  Our sample collection is woefully small – better than some counties, but still less than 2% of our county’s population.

This chart tracks the sample collections for  April based on data received from the EOC. You can see that sample collections dropped significantly at the mobile sites from Thursday, April 2-Sunday, April 5.  Therefore, the number of positive cases may appear to drop over the next few days. 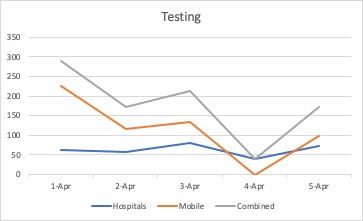 Latests From the News Service of Florida

TALLAHASSEE — Gov. Ron DeSantis focused Monday on improvements being made to the state’s overwhelmed unemployment-compensation system, rather than his embattled appointee overseeing the work.

The system has been overwhelmed as businesses have shuttered or scaled back because of the coronavirus pandemic. But newly made changes allowed the system to handle more than 22,000 unemployment applications before 10 a.m. Monday, officials said.

While demands on the system went up in recent weeks, DeSantis said people have faced difficulties because they “were having a tough time getting on. The site was down even more than it was even up at given times.”

DeSantis also said that two weeks ago he was advised the online system was the “way to go.”

But DeSantis said he likes improvements coming from Lawson and other state agency heads as jobless claims have skyrocketed. When asked if the system was fixed, Lawson said the changes have made the process “better.”

Hundreds of call center operators are being rushed through training, paper applications are being made available and dozens of computer servers were brought from Orlando over the weekend to boost the online system’s capacity.

Also over the weekend, the state activated a previously built-in backup to the Department of Economic Opportunity’s CONNECT unemployment system. The backup was designed as a redundancy when the system went down but had not been connected.

Lawson said he couldn’t answer how the system’s response would have been improved if the backup system was operational.

DeSantis, who took only a couple of questions from reporters, didn’t address a request on Friday by Rep. Jackie Toledo, R-Tampa, for an audit of the unemployment system or a separate call by Sen. Janet Cruz, D-Tampa, for Lawson to resign.

Lawson said after the news conference that he is focused on improving the system for people out of work rather than his own job security.

Toledo wants the Joint Legislative Auditing Committee to audit spending on the CONNECT system, which cost $77 million to get online in 2013. Toledo serves on the committee.

Cruz pointed to “a complete breakdown in communication” as she demanded the resignation of Lawson.

“I understand the reemployment assistance benefit website was designed to fail, and that was not an action taken by your administration,” Cruz wrote to DeSantis. “But we need a plan, and that information must be communicated to members of the Legislature so we may effectively serve our constituents. All the department has communicated to me on the reemployment benefits system is to ‘be patient.’ and to ask those I represent to ‘be patient.’ That is disgraceful.”

Also involved in Monday’s event were Department of Management Services Secretary Jonathan Satter and Department of Revenue Executive Director Jim Zingale, whose agencies have identified workers that could be shifted to help in handling the mounting paperwork.

Lawson, who apologized for the system’s failures on Thursday during a Zoom teleconference with a couple of state lawmakers, said he’s seen changes “every day.”

To handle the increase in calls by people seeking assistance, a three-week training period has been cut to a matter of days. About 250 people started answering calls on Monday after being trained over the weekend. Another 500 people were being trained Monday to answer calls starting Tuesday.

Part of the increased staff will contact people who have applied for benefits to determine where they are in the process or to verify that applications have been completed, Lawson said.

Lawson said the system is set up so jobless contractors and other gig workers who may not qualify for Florida’s assistance of up to $275 a week for 12 weeks can file applications so they will be eligible for benefits through a federal-stimulus law. The federal law is slated to provide $600 a week for 13 weeks.

DeSantis also said Monday the state may consider allowing benefits to be retroactive to when people were laid off from their jobs rather than when applications were approved.

“If they’ve been frustrated from applying, and then finally now the system is better to apply, then I think that should be something that is taken into consideration,” DeSantis said. “I mean, it’s not like they were just sitting on their hands, not doing anything.”