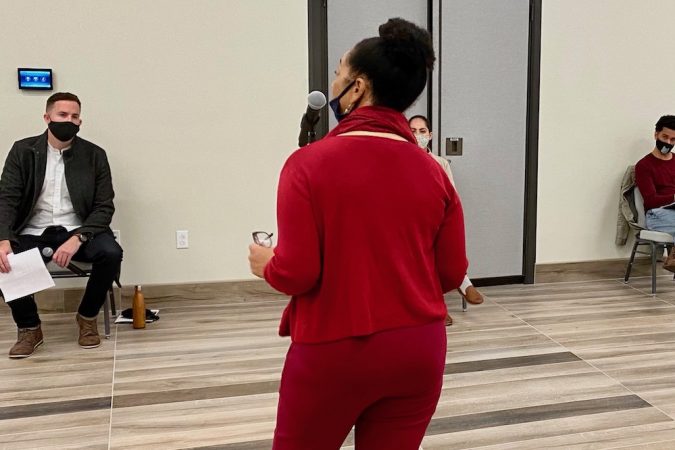 The discussions were denser, and the participation greater Thursday night during the second in a pair of town halls for Pensacola’s Citizen Police Advisory Committee, with members being asked to “take a look at policing from a different angle” and “rethink the whole idea of police.”

Julie Patton, a retired University of West Florida Department of Social Work professor who has focused on police reform issues, told committee members that she felt law enforcement should pull back from certain communities instead of attempting to further engage on more positive levels, turning one of CPAC’s main strains of discussion — an embracing of community policing practices — inside out.

“The Black areas in many ways seem over-policed,” Patton told the committee, later adding, “I would actually like to see the police decrease their interactions with communities of color.”

Pensacola Mayor Grover Robinson formed CPAC in response to the 2019 killing of Tymar Crawford by a former Pensacola Police Department detective during a traffic stop. The committee is tasked with making recommendations to the mayor to facilitate a better relationship between the PPD and the community it serves.

Since the summer, CPAC has met regularly within the confines of Pensacola City Hall. This month marks the first time the group has ventured into the community to engage the public in this discussion directly. In contrast to its first town hall at the Fricker Community Center saw meager attendance, Thursday’s engagement at the Bayview Community Center attracted more people and resulted in a more in-depth discussion about the dynamics of the citizen-police relationship.

Among the suggestions provided to the committee Thursday was the notion of scaling back the use of law enforcement in general, particularly when it comes to responding to instances involving individuals with mental issues. Also stressed was the need to remove police officers from school campuses, where they are utilized as school resource officers but retain their authority to arrest.

“I would like to see us, in a formal way, ask the police to do less,” Patton told CPAC.

Mary Williams, an attorney who moved to the area from Washington D.C., suggested that, compared with larger urban areas that experience higher rates of violent crime, Pensacola has a “perception” issue and that police needed to take efforts to reorient how the community viewed their presence.

“It’s their job to make the community feel safe by their presence, not unsafe,” she said.

Also up for discussion was CPAC’s general purpose. The committee’s future beyond the deliverance of its recommendations in March remains unclear.

“How serious is the committee? And why is it going away in March?” asked retired law enforcement officer Anita Hemphill, who also spoke during CPAC’s first town hall at Fricker.

CPAC Chairman Drew Buchanan said he felt the committee’s work should be ongoing and indefinite.

In addition to discussing the relationship between citizens and law enforcement, the town hall also served as an opportunity to weigh in on the city’s current search for a new police chief.

“I’m a law-and-order guy,” a retired Marine told the committee. “I’m counting on the police department to hire people of character because character matter over diversity because diversity seems to be all about color.”

Other speakers stressed the importance of seeking a candidate with a diverse perspective, as well as someone conscious of the ongoing evolution of law enforcement.

The retired UWF professor also said she was glad to see that CPAC planned to engage the local police union in its discussions, saying that law enforcement unions can sometimes pose a hurdle to progress.

“I think we’re in a post-modern era, and some of the unions of the modern era are not serving us well,” Patton said.

CPAC will continue its discussions at city hall, with a final report of recommendations due next month.