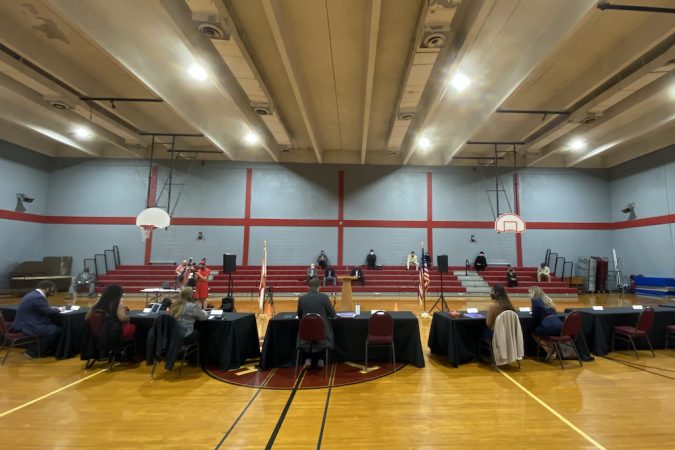 CPAC went to the people. But the people did not show up.

In its first of a pair of public town halls, Pensacola’s Citizen Police Advisory Committee held court at the Fricker Community Center Thursday evening. While only a half dozen committee members were in attendance, they still managed to nearly outnumber the audience — most of whom were city staff and the media.

Pressing past the near-no attendance and the sound system’s unforgiving bounce of reverberation in the cavernous gymnasium, CPAC Chairman Drew Buchanan laid out the group’s mission.

“Really what we wanted to do is try to forge not just new, but existing relationships and build them better between the citizens and Pensacola Police Department,” Buchanan said, dipping into the group’s origin story: Mayor Grover Robinson convened the committee in the wake of a fatal July 2019 police shooting of a Black man during a traffic stop.

Since this past summer, CPAC has met weekly, discussing issues related to the citizen-police dynamic. It will issue a report of recommendations to the mayor in March. The purpose of Thursday’s town hall, as well as a second town hall later this month, was aimed at inviting the public into these discussions.

The only member of the public to engage during the Fricker center town hall was Anita Hemphill. However, Hemphill isn’t the average member of the public: she’s retired law enforcement, having spent 31 years with the Escambia County Sheriff’s Office.

Hemphill was interested in how CPAC would be participating in the current search for a new police chief for Pensacola. She wondered what qualities the city would be focusing on in the search.

“The issues like diversity, community policing, use-of-force continuum and the systemic issues that the police department has been dealing with, are you all the ones that are going to be looking for those qualities in the chief of police?” Hemphill asked.

Buchanan explained that CPAC would be an active participant in the discussion, but Mayor Robinson would ultimately be selecting the new chief.

“We’re vessels of the community, so we want people to come to us, and we can help elevate those recommendations and thoughts to the mayor’s office,” Buchanan said.

Hemphill also had some thoughts on improving the local citizen-police relationship, telling CPAC that “officers really have to get out of their cars, they really have to build a rapport with the neighborhood, with the people.” She also reflected on training programs designed to improve this relationship that she had participated in, calling them “superficial little classes we have to take just to meet the requirements,” and contending that instead, any progress would require officers to “get down and dirty.”

“They’ve got to build that trust. It’s not going to happen overnight, by any means,” Hemphill said. “You’ve got to have an opportunity for people to still trust the police. And you’ve got to start from babies on up. They’re generational things going on in different communities, and people just don’t like the police. So, we’ve got to start in elementary school and work our way back up and build that rapport back.”

Aside from the evening’s lone public speaker, CPAC also received a pep talk from Dr. Cedric Alexander, a retired law enforcement professional brought on board by the city to assist CPAC in its mission and work internally with the PPD.

Dr. Alexander stressed that CPAC’s role in the community was a worthwhile contribution, challenging the sentiment expressed at various points over the last half-year that the committee lacked any real teeth to facilitate changes where PPD is concerned.

“I don’t want anyone in this community to think or feel or even suggest that this CPAC is toothless because it is not,” Alexander said. “The power of this CPAC committee lies in the fact that it has represented virtually every community in this city.”

The second CPAC town hall is scheduled for Feb. 18 at 6 p.m. at the Bayview Community Center.

1 thought on “CPAC’s Lonely Night Out”