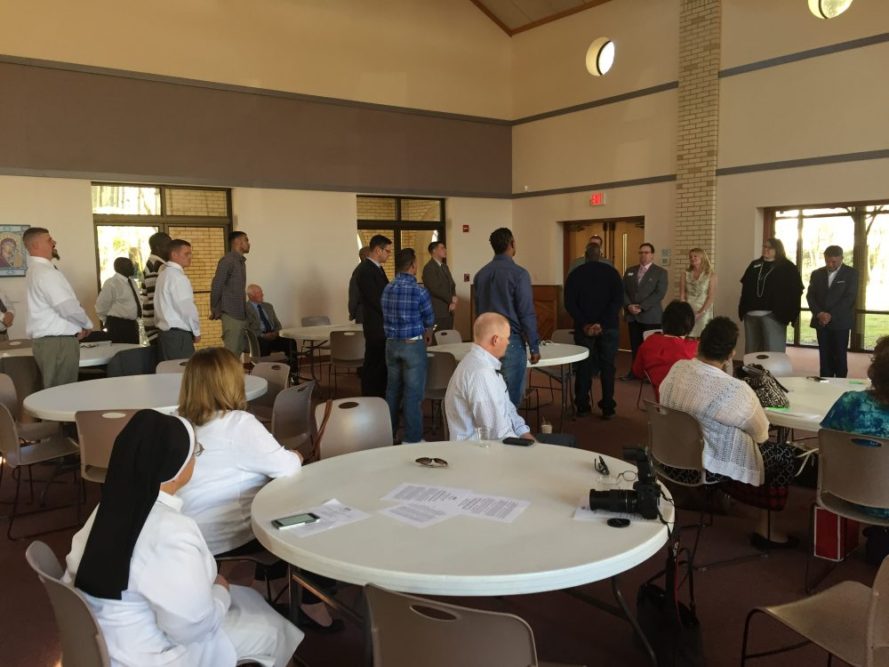 During the rigorous, 18-month program, his father died, but the 42-year-old Carrier persevered. After officially “graduating,” his mom was there to give him a big hug.

Pathways for Change not only had one man finish its program, it had about 27 men total “Phase Up” or move forward through the four phases of its program that has proven to reduce recidivism.

About two-thirds of offenders who fail to undergo treatment are rearrested within three years of release from incarceration. Compare that to the Pathways for Change 67 percent success rate. PFC costs about $10,000 per inmate per year, while it costs $20,000 per inmate per year to serve a jail sentence. The organization saves Escambia County about $1.5 million annually.

The program is a collaboration with Escambia County and more than 25 other partners.

Because of its success, the Florida Association of Counties recently asked Pathways for Change to present its innovative solutions at an upcoming event to show other counties in the state what it does.

Pathways for Change Chief Executive Officer Connie Bookman teared up when asked about Carrier and several other times during the organization’s Phase Up and Graduation Ceremony held Saturday afternoon at the Cathedral of Sacred Heart. About 70 people attended the 41st celebration, including many inmates’ families who clapped and cheered enthusiastically for the inmates.

“I remember him so clearly the first time I met him,” said Bookman, who started the program in 2004. “I could see that he was so broken and so hopeless. I’ve watched him progress. He has got what it takes. There’s no magic in it.”

Potential participants must undergo a rigorous court-monitored screening process to enter the program. The four phases of the program teach interpersonal communication, job and life skills and requires the inmates to get individual, family and group therapy.

Phases One and Two involve an intensive six-month curriculum that requires them to confront their substance abuse, alcoholism and other mental health issues. Part of Phase Three requires the inmates to do community service three days a week as a way to pay for the intensive treatment they receive free from the organization.

Clients then prepare for reentry into the community by attending work or school. The inmates are provided job training and encouraged to complete their GED, if they haven’t finished high school. The program participants must be evaluated by clinical professionals and only phase up or advance if their attitudes and behavior have improved.

Carrier credited Pathways for changing his life, as well as his Narcotics Anonymous sponsor, Tim P. He said he knows his dad was looking down proudly on him from heaven.

“Drugs were leading me on a path to nowhere,” he said. “I lost a lot of things that I’m slowly getting back, like a job, a house and a car. They’ve helped me learn that I can live life without drugs.”

Mark O’Dell, PFC’s director of admissions, said, like Carrier, all of the men hope to eventually complete the “hard” program.

“Pathways for Change gives them the tools they need to climb that mountain,” he said. “Now, they’re ready to begin their journey. They’re ready to move upward.”

1 thought on “Criminal Justice Reform: Inmates find a pathway to turn around lives”