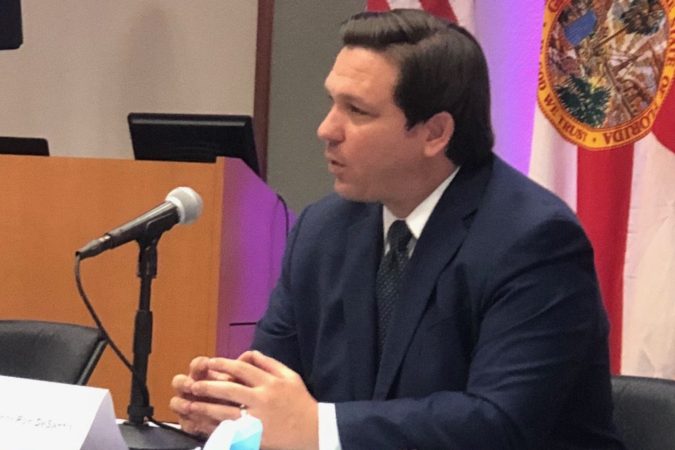 “We’ve not had a single problem with any institution or business that just follow the guidelines.” -Gov. Ron DeSantis.

Florida Gov. Ron DeSantis says that young adults and bar owners not following the CDC guidelines are primarily responsible for the recent rise in COVID-19 cases and the positivity rate in the state.

Noting the percentage of positive cases had jumped from 5% a month ago to over 12% during the past three days, DeSantis said, “That positivity increase is really being driven by a big increase over the last three weeks in individuals testing positive throughout the state of Florida in younger age groups, particularly 18 to 44. And if you look at that 25 to 34 age group, that is now, by far, the leading age group for positive tests in the state of Florida, and that’s something that’s pretty new.”

The governor stressed that COVID-19 outbreaks have occurred where the CDC and state guidelines have not been maintained.

The hospital leaders read from prepared notes, about two minutes each, that praised the governor’s leadership, thanked their staff for their efforts during the pandemic and reiterated the guidelines. The statements were followed by Gov. DeSantis asking them a series of questions in a mock roundtable. The handful of media present was then allowed to ask one question each.

During his slideshow, DeSantis said that the 25-34 age group was less likely to have significant clinical outcomes, much less likely to be hospitalized, and “way, way less likely to suffer a fatality.” He said the percentage of positives among young adults was “pretty close to 20%.”

“I know not everyone has been following all the different rules,” said DeSantis. “Some of the folks here may talk about it, but they’ll say, ‘What did you do? Oh, we got a big graduation party for all. All my friends were over.’ Well, and then you ended up having a bunch of them ended up getting infected.”

He talked about the need for more testing. “It’s important to identify who may be carrying this so that, even if they aren’t significantly ill from this, they don’t pass it to somebody else who may be more vulnerable to a serious illness.”

“This pandemic has it been unlike anything any of us have seen in our lifetimes,” said Rudolph. “I want to emphasize this—if you feel sick or have come into contact with someone with COVID-19, go get tested and quarantine until you get negative results.”

Dr. Jennings added, “No matter your age or health status, everyone needs to take this virus seriously. It can be unpredictable and impact people of all ages.”

“One common misconception about COVID-19 is the notion that the virus only affects the older populations or that it’s only people who are at risk of dying,” Dr. Foland said. “This is simply not the case. While the virus does appear to impact older individuals in more and different ways, the reality is that we’ve seen younger people contract the virus and die from it as well.”

He continued, “Even if you get the virus and do not show symptoms, you can still pass them along to your parents or grandparents or any other loved ones who are in more vulnerable groups or have preexisting conditions. Wearing a mask protects somebody’s grandma and grandpa.”

Rudolph said its drive-through testing sites had been overwhelmed. She said, “We’ve had to institute new processes just to get people through, so we weren’t backing up on Bayou Boulevard. So, it’s been young kids in the early part of the week. And then if they go home, maybe parents are coming in and so, yes, we’ve seen families coming together to get tested.”

Gov. DeSantis said. “The number one vector that we’ve seen throughout this is the home because those are the people that you’re closest in contact with. And if you’re in a situation where you have multi-generational family housing, that presents risks, particularly if you have an elderly resident of the home.”

Dr. Foland said the virus has been mutating since it first appeared in China and is “less aggressive.” He said, “We’re seeing maybe a less virulent or less strong virus spread throughout the community and a population that doesn’t have a lot of symptoms such as the 18- to 30-year-olds.”

When pressed by Inweekly, the doctor backtracked, “The less aggressive strain seems to be a theory that exists, and we need science to really do the studies to back up that theory. It’s just what is circulating in the medical community.”

However, a less aggressive virus can spread faster.

“If you get sick very quickly with an aggressive strain, you’re not out in the community, you’re in your room, you’re not spreading I,” said Foland. “If you have symptoms much like the common cold, you’re spreading it all over the place. And so that’s what other viruses, that’s how they behave.”

He explained that the Florida Department of Professional and Business Regulation shut down on-premises sale of alcohol on Friday because of “widespread noncompliance.”

“When folks have followed the guidelines, you haven’t had problems,” he said. “Most of the restaurants have done a really, really good job. Obviously, we’ve had people out and about the whole time in grocery stores and other things. So, we know it can be done safely if you have the proper precautions.”

DeSantis said his agency is trying to figure out a way forward to ensure bars operate safely and follow guidelines.

He added, “But you had so many examples where those guidelines were just tossed aside, and in the instances where we’ve seen outbreaks tied to establishments like that, it is invariably been because they’ve packed so many people in and created the type of environment that we’re trying to avoid.”