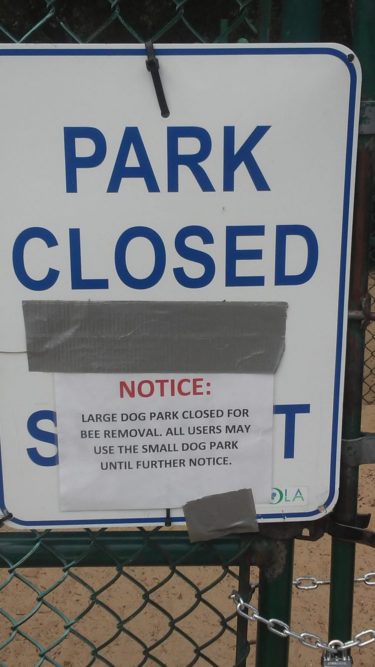 “Well, I guess it takes news report on WEAR to get the city do anything,” Labrador retriever owner Mike Williamson told Inweekly yesterday. He said that he had been complaining to Parks & Rec officials for five months. Dogs were suffering bee stings on a regular basis.

“Rick, this park attracts people from all over the city,” he said. “I’ve even meet visitors from other states and countries who brought their pets there.”

Yesterday, the City issued a statement that the large dog park at Bayview Park would be closed temporarily while the bee hives were removed. The Parks & Rec Department followed up later in the day with this update:

Today the Parks and Recreation Department asked local beekeeper Morgan Bullard with Golden Harvest Bee Farm to help relocate a hive of honeybees from a pine tree at the large dog park in Bavyiew Park. It will take a few days for the bees to be safely relocated to their new hive and in the interest of safety to park users, the large dog park will remain closed until the new hive is removed. Park officials anticipate reopening the large dog park on Tuesday, May 23rd. In the meantime the small dog park will be available for all size dogs. The City of Pensacola also offers the Bayview Dog Beach at Bayview Park as well as large and small dog parks at Roger Scott Athletic Complex.

Anyone with questions or concerns may call the Parks and Recreation Department at (850) 436-5670.

Williamson told Inweekly that he called City Hall several times about the bees. He had no confidence in the City’s 3-1-1 service.