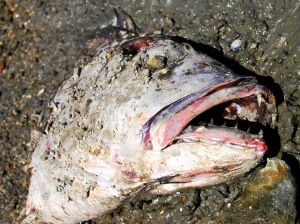 According to Deepwater Horizon Incident Joint Information Center, “the Department of Defense’s Modular Aerial Spray System (MASS) aircraft flew multiple missions—dispensing the same dispersant chemicals being used by BP and federal responders. These systems are capable of covering up to 250 acres per flight, and flights are coordinated with the EPA and the State of Louisiana to ensure all environmental concerns are addressed. Since MASS flights began on May 1, a total of 47 missions have been flown and nearly 70,000 gallons of dispersant have been applied.”

In total – federals and BP responders have deployed approximately 476,000 gallons of dispersant as of 7 pm May 13.

The NYT reported that the main dispersants are produced by Nalco: “a joint partnership with Exxon Chemical that was spun off in the 1990s, boasts oil-industry insiders on its board of directors and among its executives, including an 11-year board member at BP and a top Exxon executive who spent 43 years with the oil giant.They are from the Corexit product line.”

Oil industry profits from using this dispersant from the Corexit product line. Corexit 9527, was sprayed by BP in 1989 on the 11-million-gallon slick created by the Exxon Valdez. Cleanup workers suffered health problems afterward, including blood in their urine and assorted kidney and liver disorders.

Corexit binds to the BP oil, sinks, and then is carried away by ocean currents. The oil and the dispersant don’t go away.

According to Wired.com, some scientists think dispersants are mostly useful as public relations strategy, as they make the oil slick invisible, even though oil particles continue to do damage.

“Others consider Corexit the lesser of two evils: It’s known to be highly toxic, adding to the harm caused by oil, but at least it will concentrate damage at sea, sparing sensitive and highly productive coastal areas. Better to sacrifice the deep sea than the shorelines.”

The Material Data Safety Sheets for the Corexit state it must be handled with great care in its original form, that should not touch the skin and can damage lungs. The documents state that the potential environmental hazard is “moderate,” but state the environmental exposure is “low” when used as directed at sea in the recommended amounts.

However Nalco does state in the safety sheets: “Our hazard evaluation has found this product to be hazardous. The product should be reported under the following indicated EPA hazard categories: Immediate (Acute) Health Hazard.”

The Beast Corps interviewed yesterday Dr. Terry Hazen, Head of the Ecology Department, Center for Environmental Biotechnology at Berkeley Labs/University of California, this morning. Dr. Hazen stated that in Norway they discovered that more damage was done with dispersant than with doing nothing. He is a leading authority and needs to be included in our strategy discussions. He is experienced and pragmatic and is against dispersants.

Dr. Hazen said that the toughest thing to convince people is when doing nothing is the most appropriate strategy. He also has warnings about unintended effects of certain strategies. In Norway they discovered that untreated areas naturally recovered in five years to a state of non detectable and dispersed areas remained uninhabitable after five years. The dispersants were more toxic than the naturally occurring crude oil.

Wired.com and the NY Times suggest that there is a better, more effective and less toxic alternative: Dispersit, manufactured by the U.S. Polychemical Corporation and has been approved for use by the EPA.

BP has no connections to U.S. Polychemical Corporation. It’s executives and pals wouldn’t profit from using Dispersit….Boy, I’m starting to sound like Fox Mulder of “The X-Files.”