Marty Donovan and Jack Nobles have changed the website of their Political Action Committee. After receiving criticism for not correctly displaying the stadium, they re-shaded their map. This time they’ve reduced the footprint of the stadium and added the commercial development segment. The part that has encroached on the promenade area is not the stadium, but the reserved area for the maritime museum, which C.C. Elebash and other anti-stadium people say that they want. The master developer has also added a turnaround to allow better access for handicapped visitors to the park.

They’ve added this comment: “Our waterfront park is reduced to a small parcel of sloping ground between the baseball stadium ad the bay.”

Lol! The footprint is nearly the same as the original layout. The angle of this 2005 conceptual drawing is different, but the green park space is the same on the water:

Here is the drawing from the 2007 Design Criteria team —yes, nearly three years ago. The only big difference today is the maritime museum being pushed closer to Pensacola Bay. Stadium is no larger: 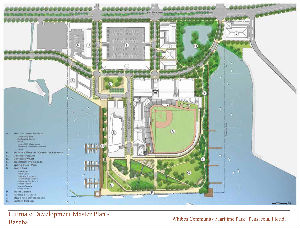 The design today isn’t very different from even the rough conceptual drawings of 2005. The stadium footprint is nearly identical.