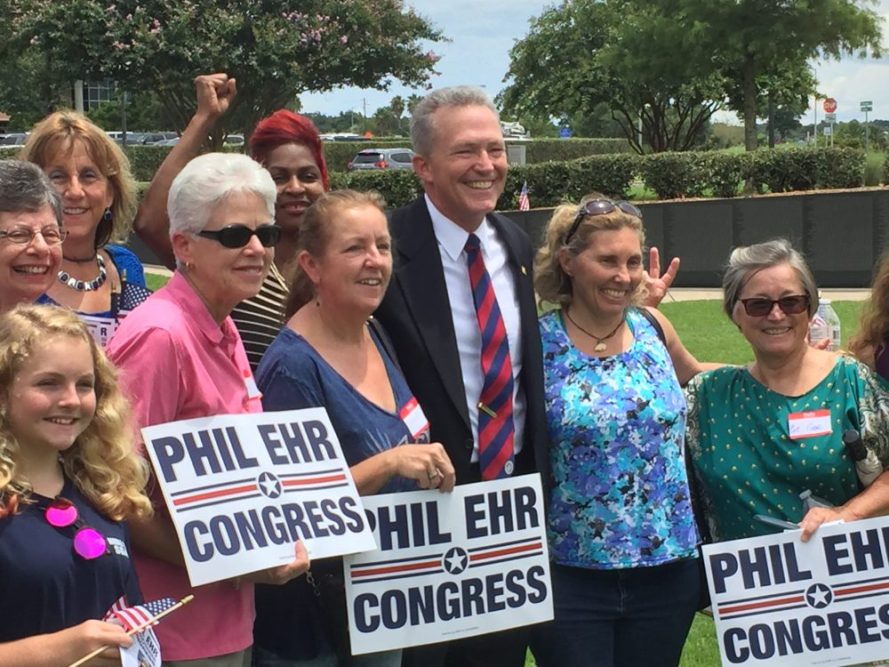 Seven months into his first term as the U.S. Congressman for Northwest Florida and Matt Gaetz, a Fort Walton Beach Republican, has already drawn a Democratic challenger.

The 56-year-old Phil Ehr, a retired U.S. Navy commander who served 26 years, attacked Gaetz as “immature” with “radical” positions, such as abolishing the U.S. Environmental Protection Agency and Department of Education.

“I see someone who really should take a political time out,” Ehr told the Inweekly after announcing his candidacy Monday morning at Veterans Memorial Park on Pensacola Bay. The formal announcement included a pledge of allegiance, the National Anthem and a short march through the park led by Ehr with 13 volunteers carrying American flags behind him.

Gaetz, a 35-year-old attorney, served in the Florida House for six years before winning his first term to the U.S. House when he received 69 percent of the vote against Democratic candidate Steven Specht.

“We won’t decide the congressional seat in the August primary, we will decide it in November,” Ehr said.

Ehr also criticized Gaetz for sponsoring a bill to give ownership of Santa Rosa Island property to its leaseholders. The federal government granted the property to Escambia County in 1947.

“Ultimately that benefits developers at the expense of Escambia County citizens,” Ehr said.

Ehr added that Gaetz and Congress in general are “dysfunctional.”

“My parents and my teachers in the Navy taught me that you must earn the respect of those you serve,” he said. “You must put their interest ahead of your own. Gaetz knows nothing about leadership.”

Among other things, Ehr, who once flew EP-3 reconnaissance aircraft, said he would support tax and social security reform that benefits the middle class; affordable health care; respect of public education and infrastructure projects that support good jobs. He said enthusiasm for his campaign will overcome PAC money and special interest money raised by Gaetz.

“I can no longer stand on the sidelines and watch Gaetz abuse our trust,” said Ehr, who admitted he was a registered Republican.

An Escambia County voter for 32 years, Ehr has been married to wife, Sue, for 21 years and they have two daughters, Jen and Claire.