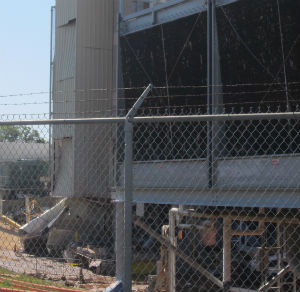 About 30 people gathered Tuesday night for the “Justice For All People” meeting at Powerhouse Assembly of God to share their stories and problems since the Escambia County Central Booking and Detention Center blew up from a gas leak Wednesday, April 30.

Sheila Travis, a bailbondsman and mother of an inmate in the blast, organized the meeting and along with others emphasized the need for medical care of those incarcerated in the Escambia County jail. Thomas and other inmate family members reported that their loved ones are suffering because they failed to receive medical treatment after the explosion or lacked enough treatment for all their injuries at Pensacola area hospitals.

Through a cracked voice, Trina Coburn said she asked a corrections officer whether her son, Westley Dyal, needed to see a doctor. The officer replied sarcastically that he wasn’t a medical professional.

“That was the last straw for me,” she said.

A handful of defense attorneys in the audience recommended the families in attendance document the injuries of the inmates they are related to and insist their legal counsel file bond motions to have them removed from the jail for healthcare they need.

“Get those motions filed, so they can get proper treatment,” said criminal defense attorney Chris Crawford. He said his visit Thursday to the jail to visit clients was like seeing injured soldiers who had just returned from the frontlines.

Defense attorney Eric Stevenson called on the crowd to demand jail administrators call on doctors trained to deal with blast and bombing injuries from nearby military bases to the jail to treat the inmates.

“The cynic in me says the county doesn’t want the injured people to be documented,” Stevenson said. “The other part of me that believes people are basically good says that jail officials are overwhelmed right now. The truth is probably somewhere in between.”

Nicole Barnes, who has a nephew in the jail because she said she was unable to post an $800 bond, placed blame for the blast on the jail facility that used to be a county hospital.

“This catastrophe has been waiting to happen,” Barnes said. “I think we need to come together as a community and tell (county officials) to not patchwork it. Redo it and do it the right way.”

Escambia County Commission Chairman Lumon May said that he is looking forward to getting an independent, unbiased report from the Bureau of Alcohol Tobacco Firearms and Explosives and encouraged everyone to attend the County Commission meeting at 9 a.m. Thursday at the county’s meeting chambers downtown. “I can’t say who’s at fault. There is a lot of liability and there will be accountability. I hope we have a good investigation from ATF. I don’t believe they have any political interest in doing anything wrong.”