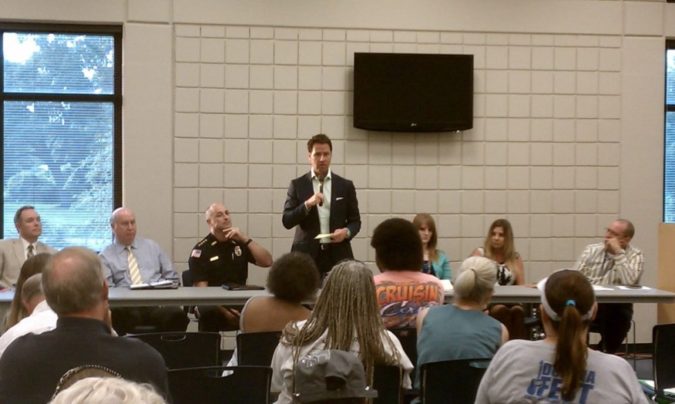 There was a time when Pensacola Mayor Ashton Hayward was not afraid to hold open meetings in neighborhoods and discuss ideas freely.

This is a post from town hall he held five years ago:

In August 2012, Pensacola Mayor Ashton Hayward, flanked by then-Pensacola Police Chief Chip Simmons, outgoing Councilman Ronald Townsend and his department heads, held a town hall with a roomful of residents from District 7 and covered a myriad of subjects as part of his “Taking City Hall to the Citizens” series.

Hayward was relaxed and engaging. He asked, “Do y’all like it when I sit down or stand up?”

The District 7 meeting was held at the Sander Beach-Corinne Jones Neighborhood Resource Center. About 40 people attended the event. Mayor Hayward solicited opinions from the residents.

“One question that’s on my mind,” Hayward opened the meeting, “is what would you like to see with the 19 acres of ECUA property?”

(Note: ECUA had completed the demolition of the old Main Street Sewage Treatment Plant and was preparing to put the property up for sale.)

One woman told the mayor about overgrown bushes, which blocked drivers’ views and once concealed her from the bus she was hoping to catch.

“Someone’s going to get seriously injured,” she said.

“It is an issue,” Hayward agreed, adding that the city was working to address the overgrowth in the right of ways and noted that he regularly gets calls pertaining to such. “People that know me [call], ‘Ashton, what the hell are you doing on this corner right here? I almost got killed.’”

Another woman wondered what the plans were for the Blount school property. Hayward said the plan was to “increase the value over there,” but that a decision had not been made yet. (Note: The City Council approved in June a residential development on the site)

“You have a charrette,” the mayor said. “You have three or four charrettes with the community and say, ‘what would you like to see done?’”

The mayor briefly addressed the city’s new marketing campaign—“Every city in Florida is the city of five flags, just so you know that.”—as well as the city’s new strong-mayor form of government—“Your voice is heard more than ever now.”—and recent discontent with his administration in certain camps.

“I didn’t run for office so I could be called the mayor, I got a lot of attention growing up,” Hayward said, denouncing the “sniping” of his critics. “I’m not looking for friends, I’m looking for results.”

Councilman Ronald Townsend—who Hayward referred to as “an epitome of a gentleman”—also took the opportunity to address his District 7 constituents. The official was wrapping up 11 years on the council.

“It has really been a tremendous satisfaction for me to do this,” Townsend told the room.

1 thought on “Five years ago, Mayor Hayward held a town hall in the Tanyard area”