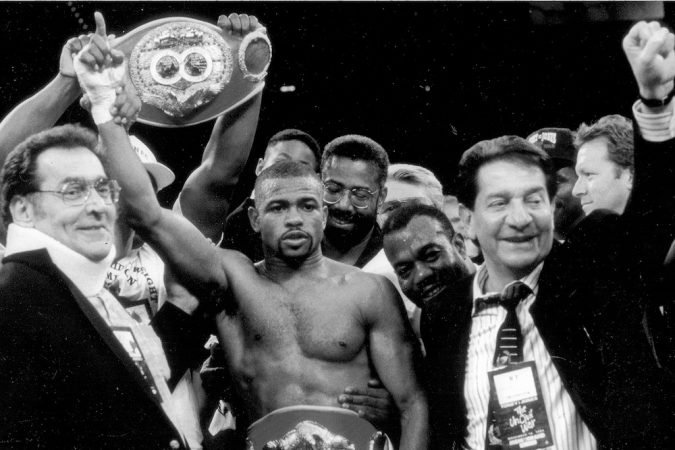 In the Jan. 21 issue, I shared a few of my favorite tales told by the late Fred Levin and his friends. Some on my favorites involved boxing.

Fred told me that his getting into professional boxing was luck. He became Roy Jones Jr.’s promotor because Roy and his father walked into his office in September 1988 after Jones had lost a controversial decision to South Korean fighter Park Si-hun in the Olympics.

“I got more enjoyment out of boxing than anybody deserved,” he shared. “You’ve got to understand, there were 50 times in world championship fights that I would get in the ring. I mean, I didn’t know what it was to lose.”

Law partner Mark Proctor traveled with Fred to the fights when Jones was on top of the boxing world and HBO televised his bouts.

“On the night of each fight, Fred would enter the ring area accompanied by his two dear friends, Jack Kemp, former NFL Quarterback and GOP vice presidential candidate, and Dallas Maverick president Terdema Ussery,” Proctor shared. “We would watch the fight; Roy would win; and at the end of the fight, when the referee would raise Roy’s arm in the air as the victor, people would swarm into the ring in celebration.”

He continued, “This is when our Fred Levin was at his best. With the start of a racehorse and the moves of a cat, Fred bounded into the ring, always one of the first, and headed straight for the HBO camera. We would all laugh, and Kemp would scream, ‘The most dangerous place in the world to be is between Fred Levin and an HBO camera!’ It was the consummate Fred and how I shall always remember him—Bigger than life, on top of the world, loving life.”

Commissioner Lumon May shared a story about when he was in his 20s, long before he ran for political office, and traveled with Fred to a Derrick “Smoke” Gainer contest in Biloxi.

“Fred was promoting the fight and got a call while we’re driving over that Smoke’s opponent wasn’t available for some reason,” said May. “Fred started yelling, ‘Get a busboy, dishwasher, put ‘em in shorts and get them in the ring. We’re not canceling the damn fight.’”

“We went to dinner with Don King and Swizz Beatz, Alicia Keys’ husband, at an Italian restaurant in New York,” said Hayward. “Levin and King were just screaming at each other, like two kids arguing at the dinner table. Fred was beating the table, as you can imagine. We were all drinking and having a big time. It was hilarious.”

Fred and Hayward then picked up Jack Kemp and took him to Cipriani in Soho to celebrate Kemp’s birthday. Hayward said, “Then we leave there and go to Madison Square Garden. And Fred walked in that place like he owned it.”

When I asked Fred about who was the most formidable negotiator he had faced, he mentioned King.

“Don King was, seriously, probably the best negotiator in boxing, law practice or anything else—he was outstanding,” said Fred. “I know that a lot of people think, ‘Well, he’s a bad dude.’ He may have been, but I would say that of all the people I had to negotiate with, he was the best.”

When Muhammad Ali died in June 2016, I asked Fred how he brought the three-time world heavyweight champion to Pensacola in 1997 to speak to local high school students.

The visit was six months after Ali had lit the Olympic flame at the 1996 Summer Olympic Games. The retired champ, who was battling Parkinson’s disease, launched a “Healing” tour to talk with students across the country about tolerance.

“It was chilling that Muhammad Ali, the baddest man in the world, was trying to get everybody together—Christians, Jews, Muslims,” Levin told me.

He reached out to Ali’s photographer, Howard Bingham, to see if the boxing champ would come to Pensacola. If Ali agreed, Levin would invite the students from area high schools to attend the Pensacola Bay Center event.

“At first, all hell broke loose,” said Fred. “The school board was up in arms. People were protesting, ‘This is a Muslim, and you’re bringing him here.’”

School officials pointed out that the event was not being held on school property. The event was not mandatory, and parents had to sign permission slips, as they would for any field trip.

“Somehow or another, we got through that, and I invited up Muhammad and his wife to spend the night at my home in Gulf Breeze,” said Fred.

He held a fundraiser at his home on the eve of the event and told me about finding Gov. Lawton Chiles and Ali talking at his kitchen table after the party.

“According to the maid, it was hours that they talked,” shared Fred. “The governor, when we got up the next morning, said that, ‘You just have no idea what this means to me.’”

At the Bay Center event, students cheered as Ali exchanged mock punches with Roy Jones Jr. Ali did not speak to the audience, although he could hold a conversation in a whisper.

Levin said, “His wife, Lonnie, spoke to the crowd, and I remember she walked on the ice all around the thing. I was scared to death she was going to fall. She walked all around, talking to the students about love and healing.”

For Levin, Ali’s visit stood out for the purity of his message.

“Looking back on the history of Pensacola, this probably was one of the most significant events that ever took place here,” said Levin, “because he was trying to do something that I don’t think ever took off, and that was healing and trying to bring the races together.”