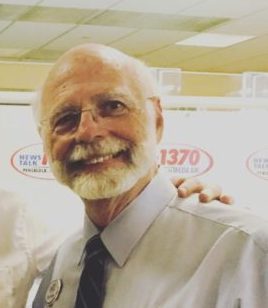 On Monday, Congressman Matt Gaetz (R-FL1) said he believes the science behind climate change and that those who deny the facts will be seen as being on the wrong side of history.

“I believe the Earth is warming. I believe that humans contribute to that warming,” said Rep. Gaetz. “And I think that history will judge very harshly those who are climate deniers. And I don’t want to be one of them. I want to work together with Republicans and Democrats on bipartisan solutions to climate change.”

Gaetz was speaking at town hall meeting hosted by News Talk 1370 WCOA and Inweekly in the Studer Community Institute building in Pensacola.

Recently the freshman congressman from Fort Walton Beach joined the Climate Solutions Caucus, a group formed in early 2016 to bring Republicans and Democrats together to advance meaningful climate change legislation.

Gaetz said at the town hall that he believes in bipartisan solutions that will create innovations to deal with climate change more effectively than adding more regulations.

However, he hasn’t changed his mind about the Environmental Protection Agency. In February, Gaetz introduced H.R. 861, which would “terminate” the EPA on December 31, 2018. He still believes that the states do a better job of protecting the environment than the federal agency. To illustrate his point, he talked about how the EPA failed to protect Flint, MI residents from lead poisoning in its drinking water.

“There is a ton of evidence that suggests that the EPA is not effective at protecting our environment,” said Gaetz. “Well, the best evidence comes from the EPA’s own inspector general, who did a report after the Flint, Michigan fiasco and found out that the EPA had information that the water supply was being poisoned. Had the authority to act. Knew that they had the authority to act. And did nothing.”

He added, “So I would totally reimagine the EPA and I would try to design a system where we actually use more technology at the local level. “

9 thoughts on “Gaetz believes in climate change, not EPA”