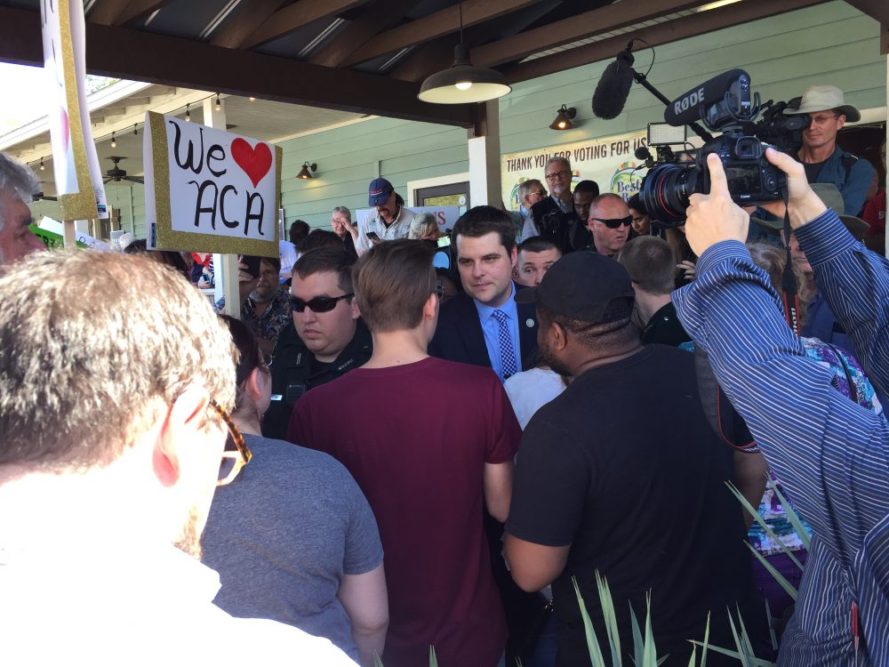 On “Pensacola Speaks” yesterday, Congressman Matt Gaetz said the House Republicans’ failure to repeal and replace Obamacare last week was “the most disappointing week of my seven years in public service.”

“Because there’s a promise that Republicans made to the American people that remains unfulfilled,” said Gaetz. “And that’s very unfortunate, very embarrassing, and I think we all have to take responsibility for that.”

The freshman Congressman spent his Monday convincing the House Class of 2017 to not stop fighting for health care reform. He asked them to parry the principles of Northwest Florida.

“We’re not quitters. You don’t give up. If you’ve made a promise, you keep it, and you don’t just move on to the next thing that you’re interested in, so my work today and this week will be to refocus the Republican majority on keeping the promises we made the American people.”

Gaetz believes it was a mistake for Speaker Paul Ryan to not call for a floor vote on the GOP bill.

“I think that you should vote,” said Gaetz, who called into the show from the nation’s capital. “I came here to vote, not to just have things fizzle because people are having challenges. I think that the country deserves to know who supported this bill and who didn’t.”

The congressman didn’t think the legislation was perfect, but he supported it.

“It would have, for the first time in a generation, reformed the Medicaid program that’s bankrupting the country,” he said.

He listed the parts of the bill he liked. “We would have had work requirements in Medicaid. States like Florida could have opted out of the federal system altogether and designed their own programs to care for the vulnerable. We were going to de-fund Planned Parenthood and the Obamacare Employer Mandate and the Individual Mandate, all these things the conservatives have been fighting for quite some time.”

Gaetz doesn’t believe the GOP should move on to tax reform.

“It’s easy to surrender, wave the white flag, just say, ‘Well, it’s too tough, so we won’t vote and we’ll move on to tax reform.’ That’s a ludicrous proposition,” he told Inweekly.

He added, “How are we going to move on to tax reform or infrastructure when we can’t keep the most fundamental promise we made the American people on healthcare? We made a promise, and if we’re in the business of breaking promises, we’re not going to be any more successful in the next issue, so I’m not giving up. “

Gaetz is convinced that if House Republican don’t repeal Obamacare and replace it, the party will lose control of Congress.

“If we fail to repeal this law, I’m just telling you, Rick, you heard it here first, we will lose the majority in 2018, and then what you’ll have is you’ll have Nancy Pelosi as Speaker and she’ll probably impeach Donald Trump in the first 30 days of being Speaker,” he said. “That’s what we’ll be going through if we’re unable to get our act together as Republicans and prove that we have the responsibility to govern.”

2 thoughts on “Gaetz on Obamacare: ‘We’re not quitters’”