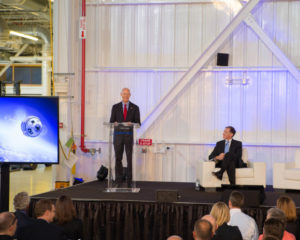 TALLAHASSEE, Fla. – Today, during a meeting of Florida’s Cabinet, Governor Rick Scott recognized Kyle Rojas with the Governor’s Young Entrepreneur Award. In 2014, Kyle started Barbaric Barbell in Tallahassee to provide powerlifting and weightlifting apparel for fitness competitors. Kyle served in the U.S. Marines from 2005-2010 and developed a dedication to fitness training that […]

TALLAHASSEE, Fla. – Today, Governor Rick Scott announced that Florida’s private-sector job growth rate of 3.7 percent in August was the highest among the ten most populous states, including Texas, New York and California. This is the sixth month in a row Florida’s job growth rate has been first among large states. Compared to all […]

DAYTONA BEACH, Fla. – Today, Governor Rick Scott announced the expansion of Total Quality Logistics (TQL), one of the largest freight-brokerage firms in the country. The expansion of their logistics operation will create 100 new jobs and a capital investment in Volusia County of approximately $565,000. TQL has operations in Tampa, Jacksonville, Orlando and Fort […]

TALLAHASSEE, Fla. — Today, Governor Scott announced that Florida’s defense industry had a $79.8 billion economic impact in Florida in 2014, according to a report commissioned by Enterprise Florida and CareerSource Florida. This is a $6.4 billion, or 8.7 percent, increase from 2011 and ranks the defense industry as the fourth largest industry in Florida. […]