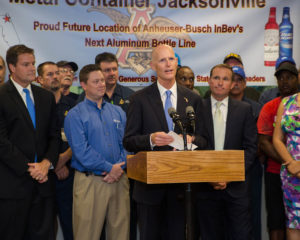 Here are the some of the press releases from the governor’s office for the past week:

TITUSVILLE, Fla. –Today, Governor Scott announced that Embraer, one of the world’s largest manufacturer of commercial jets, is creating 150 new jobs and making a $3.5 million capital investment in Titusville. The company broke ground on their new Aero Seating Technologies building, which will produce seating solutions for various Embraer products, including design, development, and […]