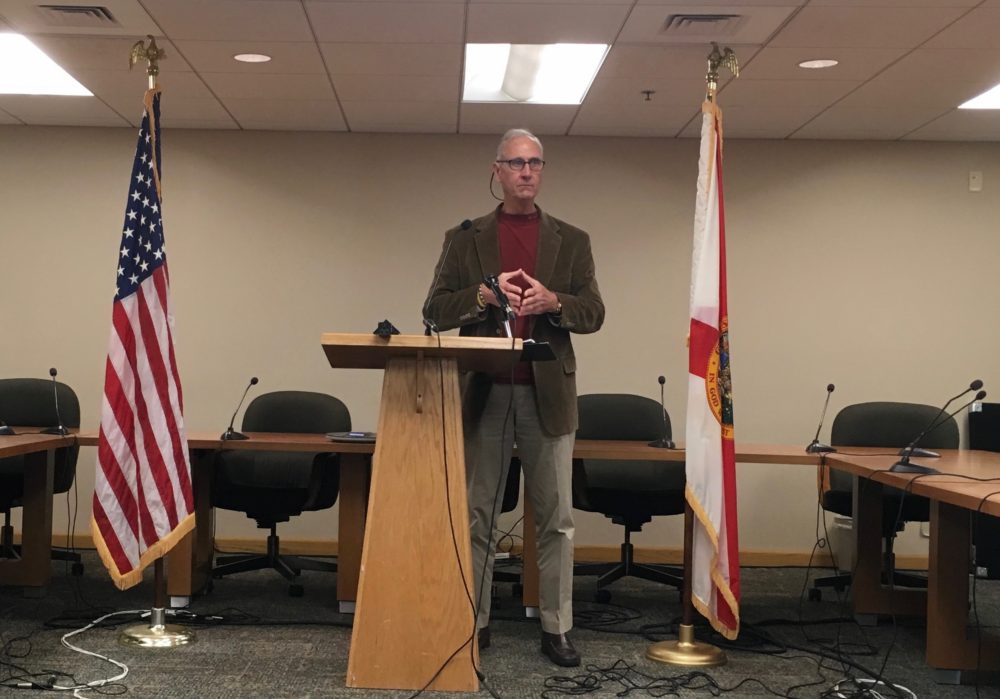 –Three months into his term, Pensacola Mayor Grover Robinson is providing what could be considered a blueprint for his time in office, indicating he intends to focus heavily on the downtown area and issues like walkability and also has an appetite to shake-up the city’s organizational chart.

“We’ve got a lot on our plate,” City Administrator Chris Holley said Monday during a morning press conference.

Holley laid out some of the administration’s priorities during the press conference, and then elaborated further later in the day during the Pensacola City Council’s agenda conference. The administrator summed up Robinson’s focus with an explanation detailing municipal structural changes.

“We’ve proposed to the mayor a structure that kind of aligns the departments that are dealing with a lot of the development issues, the downtown issues that everybody’s familiar with, you know, I could rattle them all off,” Holley said, listing topics: it’s security, it’s pedestrian movement, it’s bicycle movement, car movement, it’s relationship of the the port, it’s the SCAPE study, it’s the DIB, it’s the CRA …

Specifically, the mayor intends to beef up police presence downtown when funding and staffing allows and also assess the area’s security camera coverage, as well as continue to work towards remedies to address the issues of homelessness and panhandling in the area.

Robinson is also planning to hire someone to oversee efforts to make the city more walkable and bikeable. The so-called Complete Streets initiative has been on the mayor’s list of priorities since taking office.

“This has become a very important issue here in the city of Pensacola,” Robinson said, citing the area’s high number of pedestrian-vehicle accidents.

The mayor noted that he expected the forthcoming report next week from his transition team to include recommendations concerning the city’s Complete Streets efforts. He said that aside from the recent hire of a lead city attorney, he considers the Complete Streets focus to be the “most significant offensive position we’ve tried to play since we’ve been in office.”

“We are going to make a commitment that we will be having people at the city that will be looking at this and employees that will be addressing walkability, bikeabilty, parking, those kind of issues that we have in an urbanized area, and really looking at Complete Streets that are more than just streets for cars,” Robinson said during Monday’s press conference.

In addition to Complete Streets, Holley also listed other areas the administration will be focusing on. Among these are assessments of the city’s ADA accessibility issues, a consideration of how best to handle public records request, working on the city’s HR manual and employee grievances process, conducting a “cultural survey” among city employees and assessing the city’s pay scale in an effort to attract talent.

Holley also mentioned the concept of reassessing the city’s relationship — and perhaps restructuring the relationship — with both the Downtown Improvement Board and the Community Redevelopment Area, the latter of which the members of city council oversee. The administrator did not specify how the relationships might evolve, but told council the city was open to conversations.

“We feel they are an integral part to that whole community development process, there are resources they bring to the table that need to be planned properly and coordinated properly, so we’re offering to help better coordinate those functions,” Holley said, adding that he was open to discussing restructuring “officially or unofficially.”

Holley also touched on city staffing Monday, providing a list of employees expected to exit the city, as well as several new positions the mayor will be looking to bring on board. Among those leaving, though not in the immediate future, are top positions such as Holley himself, Assistant City Administrator Keith Wilkins and Budget Director Dick Barker. New positions include the Complete Streets hire, as well as positions in the legal department.

The city administrator — whom Robinson coaxed out of retirement to assist him in assembling a team at the city — said that dealing with the city’s leadership structure was among his most important priorities. He noted how many of the city’s top staffers are aging out of their jobs and the importance of preparing for such holes, pointing specifically to plans for hiring assistants to become familiar with administration and finance.

“My advice,” Holley told city council in regards to the future vacancies, “is that you have a good strong plan and that you are ahead of the curve, so to speak, in filling those gaps.”