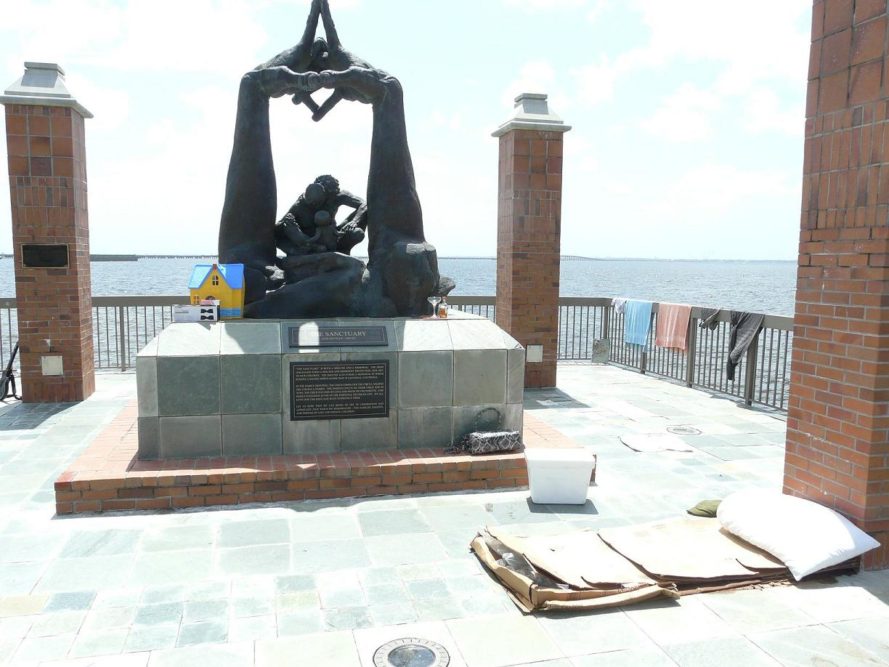 Clark Thompson remembers stopping across from the Veterans Memorial Park in downtown Pensacola to watch the Red-winged Blackbird with a distinctive scarlet-and-yellow shoulder patch and listen to its classic song heard in wetlands and marshes across America.

He wanted to mark the scenic spot on Pensacola Bay where he found so much peace and stunning beauty. Thompson met Kathy Gaut whose daughter, Joanna Otto, disappeared Nov. 20, 1992, after a night at a party.

Gaut thought the location would make an excellent place to honor her daughter and the 2,300 other children in the United States who go missing every day.

They ended up raising about $750,000 in money and in-kind services to build the Hawkshaw Lagoon Memorial Park, which serves as the National Memorial to Missing Children. The list of donors included many of Pensacola’s top organizations, such as Gulf Power, the Levin & Papantonio law firm, Pensacola Chamber, Sacred Heart, Thompson-Briggs Developers and on and on.

Completed in 1996, a pedestrian bridge leads out to an observation deck on an inlet where a bronze statue, “Sanctuary,” by Sam Nettles, rests. The site was supposed to be a place of solace for those mourning their missing children. Instead, it has become a haven for the homeless, who often spend the night on beds made of cardboard after a day of panhandling.

The dark green tiles are broken and missing on the deck and around the statue. Four lights on the observation deck that spotlight the Missing Children statute are busted, and lights regularly go out along the walkway. Rust is spreading on the bridge structure. Trash litters the site. A faint smell of urine hangs in the air.

Inweekly tried to reach Pensacola Council President Brian Spencer and Mayor Ashton Hayward about the memorial the city took ownership of in February 2008.The city had promised to maintain the site in a “good state of repair and cleanliness.” But neither Spencer nor Hayward replied for this story.

Thompson has had just as much luck. His latest letter, dated Aug. 8, to Spencer yielded zero response.

“The deal was the city was going to maintain it and the bronze statue,” Thompson said. “It just hasn’t happened. (Spencer) hasn’t said a word. That’s what irritates me.”

Across Bayfront Street about 15 steps from the rundown Hawkshaw Memorial is the inviting Veterans Memorial Park. Mowing and maintenance have kept Veterans Park spotless and eye-catching. Meanwhile, the city has ignored the national monument across the street.

Hawkshaw’s disrepair upsets Gaut whose daughter went missing 25 years ago this year. She’s trying to organize a ceremony but feels like she cannot because of how rundown the once tranquil site has become.

“I hate that. I hate that,” Gaut said, shaking her finger. “Lots of homeless come here to do their sleeping.”

Late on a recent afternoon, while meeting with Gaut, Thompson, and Holland at the memorial, one homeless man pushed in a wheelchair a homeless woman, who was missing both legs, out to the Hawkshaw observation deck. Freddie Finkley and Stephanie Tidwell said they come out for the breeze and blame teenagers for vandalizing the memorial.

“Teenage kids come and tear it up,” Finkley said.

According to Thompson, the Hawkshaw Lagoon Missing Children’s Memorial non-profit organization agreed to maintain the bronze memorial in good repair while the City agreed to maintain everything else to city park standards. He took pictures of the spot when a homeless woman decided to make her home there for two months. She would hang her wet towels and laundry on the observation deck railing and, even, would defecate there.

Thompson doesn’t think he’s asking city officials to do too much.

“I want them to maintain it to the standards of other city parks,” he said. “That’s what I would like to see them do.”

Clark Thompson provided these photos to Inweekly that he sent to the Mayor Hayward, President Spencer and the head of Parks & Recreation, Brian Cooper, on Aug. 8:

Please see the attached photos taken on Sunday, August 6 which show the sad condition of the Hawkshaw Lagoon Missing Children’s Memorial site which the City had agreed to maintain in a good state of repair and cleanliness. The site has now been “claimed” by a homeless lady and her friends for at least the past two months. The horrible conditions include numerous tiles that have been stolen, serious rusting of the structural bridge frame, non-working light fixtures and electrical outlets, and even aged human feces decorating the platform. Obviously, the state of the memorial is enough to discourage any visitors.

I will appreciate at very timely response as to the intent of the City to rectify this sorry state of affairs. This is not the condition that the City promised the Hawkshaw Lagoon Missing Children’s Memorial non-profit when it asked to take over the maintenance of the site.

2 thoughts on “Hawkshaw Lagoon: The forgotten national monument of Pensacola”