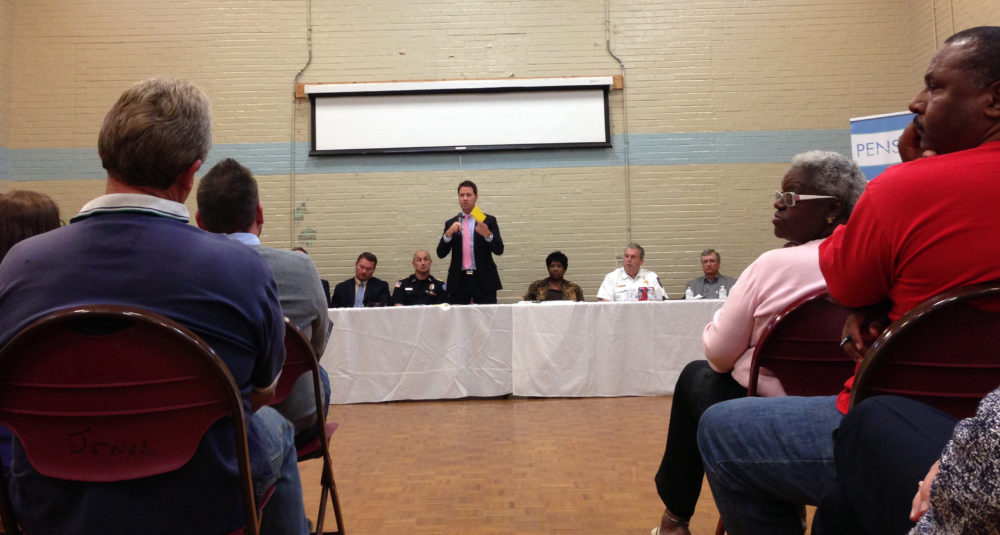 About an hour into Monday night’s District 7 town hall meeting, resident Raymond Reese was getting hot. He was upset about blight, speeding traffic, clogged storm drains and a lot more.

And he was letting the mayor know it.

“The west side of town is the ghetto!” shouted Reese. “And nothing is being done about it.”

“I beg to differ with you, Mr. Reese,” responded Mayor Ashton Hayward.

The mayor contested Reese’s accusation. He conceded the city had problems to be dealt with and said efforts were being made—although there’s no “silver wand.”

“Let me make it real clear, it’s personal to me—I’ve stepped up to the plate as the mayor, and I’ve delivered as mayor and I’ll continue to deliver as mayor,” Hayward said, acknowledging the area’s challenges. “I can’t please everyone. I can’t please you, and you’re my friend.”

The exchange with Reese—who was an active supporter of Hayward during his campaign for office—came late in the mayor’s District 7 town hall. The preceding discussion with his constituents ranged from crime to RESTORE money.

“We don’t have all the answers,” Hayward opened the meeting, “but that’s why it’s good to have town hall meetings and get community input.”

The District 7 town hall was held at the Fricker Neighborhood Resource Center—a part of the mayor’s ‘Taking City Hall to the Citizens’ series. During this town hall—the 17th such meeting since 2011—a few dozen residents filled the Fricker Center’s long, brick hall, filled out yellow question-cards and waited their turn.

“I’ll kick it off right now: speed bumps at Peach Tree and Jackson,” Hayward began, reading from one of the cards.

A resident proceeded to explain how drivers routinely speed down Jackson Street. He yells at them, sprays a water hose at them. He suggested the city set up a speed-trap— “I promise they could fill up their kitty”—and said he’s worried about kids getting hit.

“I’d hate to see speed bumps,” the man said, “but I’d rather have the lesser of two evils.”

“There’s speeding issues all around the city and we’re not going to say there’s not,” Hayward said, turing the question over to staff to explain how the city was assessing the problem.

“Jermaine, how you doing?” the mayor asked. “Crime?”

“I know in the past I came at you really aggressive,” Williams said, before calmly explaining that “it’s mayhem out there” and “we are absolutely dying and need the help.”

Pensacola Police Chief Chip Simmons acknowledged that gun crime and burglaries had “peaked” last year. He said this year’s numbers were better so far—“we’re not saying we’ve won the battle, because we know we have not”—and that the mayor was plugged in and engaged with such issues.

“It seems like every time I sit down for dinner, Mayor Hayward is calling me,” Simmons laughed.

Williams said he knew the officials were trying to better the situation and urged them to let the community know they were focused.

“Getting behind closed doors, I see you in a different light,” he told Hayward, “but not everybody has that opportunity.”

Tony McCray had questions for the mayor regarding the RESTORE Act, which directs money gained via Clean Water Act fines stemming from the 2010 oil spill to the Gulf Coast. He wanted to know how Pensacola was positioning itself to best take advantage of the funds.

Hayward said the money should be used for “projects that are going to be sustained 100 years out” and “not on pie in the sky ideas.” He also said the city should approach the RESTORE matter with “one voice.”

“It’s all of us as a city,” the mayor said, assuring the public that the city was focused on the issue. “Hey, don’t think that we’re going to be forgotten, these are serious dollars.”

Former Escambia County Commissioner Marie Young also had questions for Hayward at the town hall. She wanted to know if the city was making progress in its attempt to address several areas considered to be problem-spots in District 7.

The mayor told her that he had recently visited Tom, Ann, Buddy’s on Cervantes while on a ride-along with Chief Simmons. The locale has been the site of multiple shootings, including one involving a police officer in 2011.

Last year, the city attempted to address such issues by applying code enforcement liens. The liens have been payed.
“When we put the heat on them, they came and wrote a check for $75,000,” Hayward said, adding that the city was still focused on such locations and problems. “I know it’s not perfect. I don’t know if it ever will be perfect, but it’s something we focus on night after night.”

Also at the District 7 town hall, a resident inferred that the mayor only “showed up for big events.” He urged Hayward to focus on “the little people.”

“You do realize that the reason you’re mayor is because the little people voted you in?” he asked.

Hayward disputed that position and said he would “continue to deliver, in a big way, for District 7.”

“There are no little people,” the mayor said.