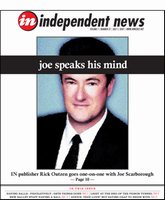 The July 5th issue has a candid interview with Joe Scarborough, former Congressman and host of “Scarborough Country” and “Morning Joe” at MSNBC. Here are some of his choice quotes:

“The Iraq War has been a disaster for Bush. He put the wrong people in charge of the war and they tried to win the war on the cheap”

“I really believed the Republicans had lost their way.”

“Under the Bush administration, we’ve bankrupted our country.”

“No way is George W. Bush a conservative. The conservative movement is dead in American politics right now. All that Ronald Reagan fought for has been given away.”

“O’Reilly is actually more loyal to the party bosses than conservatism.”