From Unified Command: The crew of one of the thousands of Vessels of Opportunity (VOO) working in response to the Deepwater Horizon oil spill recently recovered approximately two tons of tarball material in the Gulf of Mexico.

The recovery was the result of the kind of creative thought and innovation at work among the more than 27,000 people working around the clock in the Gulf of Mexico in the largest oil spill response in U.S. history.

Designed by Gerry Matherne, a BP contractor and nearshore task force leader, the idea is simple. A shrimp boat with outriggers on each side drags mesh oil-collection bags made of perforated webbing near the ocean surface. As the boat trawls to collect oil patches, the bags, attached to an aluminum frame, collect oil. When filled, the bags are disconnected from the frame by crew on support vessels, and then towed to a lift barge for hoisting into a collection barge.

For the collection of heavy, thick, dispersant-treated oil, this new mechanical recovery system is far more efficient than hand scooping and better suited than traditional (oleophilic) skimmer systems. Traditional skimmers are best used to collect less viscous oil that can be pumped from the skimmer into a collection tank.

“This is a great example of the heart and soul of the response…finding creative ways to get the oil offshore, which increases our effectiveness alongside traditional skimmers,” said U.S. Coast Guard Incident Commander Capt. Steven Poulin.

The device was designed and built in a single week. The technology is now being duplicated for wider use in the response.

The Vessels of Opportunity (VOO) program was designed and implemented to provide local boat operators an opportunity to participate in response activities, including transporting supplies, assisting wildlife rescue and deploying containment and sorbent boom. More than 1,900 VOOs have been deployed to date in Alabama, Florida and Mississippi.

This photo is one of two one-ton masses of tarball material recovered south of Perdido Pass, Fla., by the crew of the lift boat Sailfish, a Vessel of Opportunity working in the largest oil spill response in U.S. history, on Saturday, June 11, 2010. Photo by Petty Officer 3rd Class John Walker, USCG. 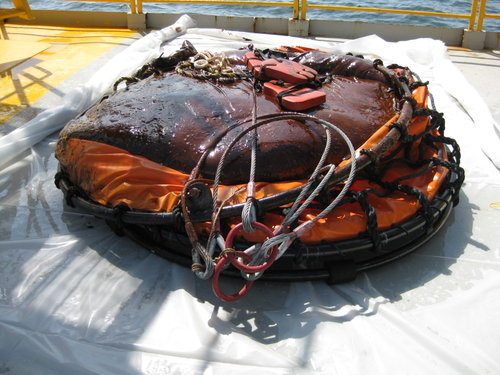