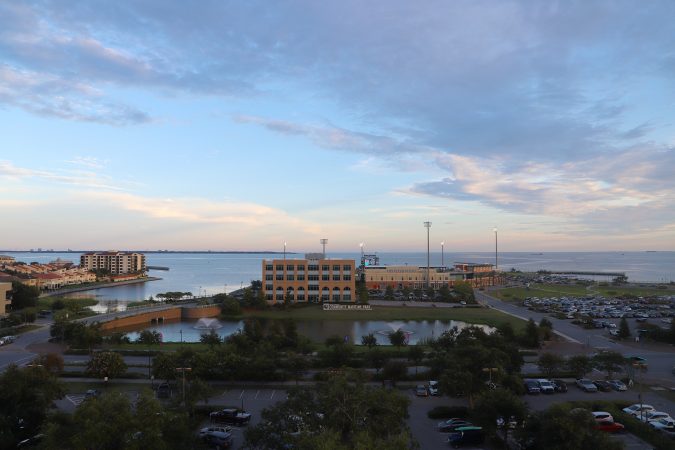 By Jeremy Morrison and Rick Outzen

Though some expressed concerns about the funding, rebates and blight, the Pensacola City Council has given its initial approval, by a 5-2 vote, for a mixed-use development for the surface parking lot and a green space in front of the stadium at the Maritime Park.

The council’s conceptual approval of Inspired Communities of Florida’s plans for Parcels 4 and 5 starts the clock for city staff to complete the lease and option agreement by the end of March.

Inspired’s $110 million project calls for 600 residential units, up to 50,000 square feet of retail space and a 900-space parking garage. The developer will pay half of the garage’s estimated $22 million price tag for the spaces its tenants will use. The city will foot the balance to cover its need for public parking and the contractual commitments to the Blue Wahoos and Maritime Place and provide spaces for the other parcels.

The developer gets a 99-year lease. The project would be completed in two phases. The first phase must be completed no later than Jan. 1, 2026. If the northern half of the property is developed first, the annual lease fee is $325,000. If the southern half is developed first, the annual fee is $275,000. When the second phase is completed, the total lease will increase to $500,000 a year. The lease will increase 5% every five years. The project will pay an additional $45,000 annually toward Maritime Park maintenance, with increases shared on a prorated basis.

Additionally, Inspired would be granted an Area Reinvestment Agreement/Tax Increment Revenue rebate worth about $15 million over 20 years. Last year, the city council approved the ARA/TIF rebate program for the West Main District as an incentive to promote redevelopment inside the district that is consistent with the CRA 2010 Urban Core Community Redevelopment Plan and the West Main Master Plan. Inspired will pay 75% of the TIF taxes for the first 10 years and 50% for the next decade.

If the council approves the final agreement next month, Inspired will have an exclusive option on the two parcels through Aug. 31, 2023, before the lease agreement is fully executed. The developer will pay $3,480 per month for the option. It will have the ability to obtain one six-month extension for a non-refundable lump sum of $60,000.

“During those 18 months, the checks paid for the option pale in comparison to the money that Inspired will be spending to do their homework and due diligence,” Andrew Rothfeder told Inweekly after the council vote. He is the real estate consultant who has helped Mayor Grover Robinson and his staff negotiate the terms of the deal with Inspired.

“Inspired doesn’t have to commit for 18 months, but they’re getting more and more invested,” Rothfeder explained. “They’re hiring Cooper Carry to do all their architectural plans and concept designs. They’re doing market studies. They’re hiring engineers, and they’re doing all their homework to determine if the project is financially feasible so that a lender will help finance it.”

He continued, “Right now, we’re at the five-yard line, 95%’s negotiated. We just got to turn that 10-page term sheet into a 50-page ground lease with the details.”

Check out the rest of article here – Maritime Development Recap.

1 thought on “Inside Inspired proposal [podcast]”