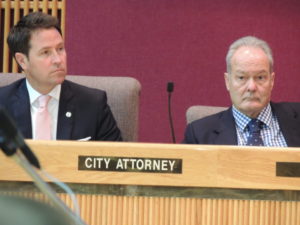 The job description for the Pensacola City Attorney has been posted on The Florida Bar website:

The City Attorney shall serve as the chief legal adviser to, and shall represent, elected or appointed officials, boards and commissions, and employees in the course and scope of their official duties or employment, respectively. The City Attorney shall represent the City in legal proceedings and shall perform any other duties prescribed by State law, by this Charter, or by ordinance or resolution. The Mayor shall appoint the City Attorney, with the consent of the City Council by an affirmative vote of a majority of City Council Members.

(All of this is in the city charter)

However, this last sentence of Section 5.03 of the charter is not included in the job description:

The City Attorney may be removed from office with the concurrence of the Mayor and a majority of the City Council.

Instead it is replaced with:

The City Attorney will report administratively to the Chief Operations Officer and shall devote his/her entire time and attention to the business of the office.

1. Did the Pensacola City Council vote on the mayor’s decision to not renew Jim Messer’s contract? The charter doesn’t allow the mayor to change the city attorney without council approval. The Dec. 5 email from COO Tamara Fountain doesn’t say that Messer resigned. The mayor let the contract expire. Did he have that power? – I guess the debate will be over the word – “may”

2. The city charter does not have a chief operations officer position and does not subordinate the city attorney to anyone but the mayor and city council.

The Functional Organization Chart included in the FY 2015 budget doesn’t list the COO (the position was created in August 2014) and has the City Attorney, City Administrator and City Clerk reporting directly to the mayor – Chart. When the council approved the FY 2015, did that vote also cover approving the organizational chart?

If Mayor Hayward wants to place the COO over the entire organization, shouldn’t that discussion be held in a council meeting? According to the charter, the person in charge of all administration is the city administrator.

3. If the job description for the city attorney and the change of command is different than the city charter, shouldn’t it be approved by the city council?

None of these questions have anything to do with Tamara Fountain – in fact, take all names and personalities out of this discussion.

Simply, how we structure our city government and handle the replacement of key positions, such as city attorney, city administrator and city clerk, set precedents. Are we following the city charter?

I was thinking the Pensacola City Council might not need its own attorney, but it appears I spoke too soon.

—
Dec. 30 update: I spoke with Tamara Fountain on the phone this afternoon. She said that the job description could have been worded better and that the intent was not to place the COO over the city attorney or change the organization chart, only to help the city attorney administratively. As far as getting council approval on not renewing the Messer Law Firm’s contract as city attorney, she needed to check into that and should have an answer next week.