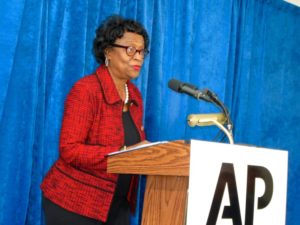 The AP Legislative Planning Session began on Wednesday with Florida Senate Democrat Leader Arthenia Joyner, D-Tampa. I felt a little sorry for this little black woman standing before three dozen reporters who were on the top floor of the state capitol waiting to grill Gov. Rick Scott.

Joyner started slow, but it didn’t her long to get fired up, going after what she called the elephant in the room.

Joyner said Scott did not follow the correct process in seeking to replace Bailey. She told reporters that the ouster of Bailey and lack of following the process left the perception that the FDLE would be, in the future, answering to one person—Gov. Scott.

“Gov. Scott didn’t purchase the state of Florida,” she said. “He was elected to serve it, and he needs to start acting that way.”

“He (Scott) seems be getting Bobby Jindal’s hand-me downs, and how does that bode for Florida?” Joyner asked.