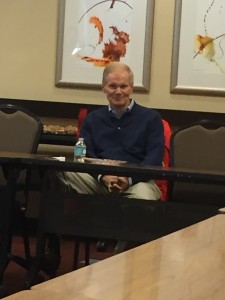 At the end of U.S. Sen. Bill Nelson’s meeting today with local leaders, Federal Judge Casey Rodgers thanked him for his support during her nomination to the bench.

Rodgers was nominated by President George W. Bush in 2003. She had to be approved by a Democrat-controlled Senate, when both of Florida’s senators were Democrats–Bob Graham and Bill Nelson.

“Five names came up…all five names went to the White House,” said Rodgers. “I was nominated, but there was no senator to shepherd me through the process because we didn’t have a Republican in a position.”

She explains, “But let me tell you, this man, he was my shepherd throughout that process. He not only supported me through the process, but he actually showed up at my Senate confirmation hearing. He introduced me to the Senate. Needless to say, it was smooth sailing after that.”

Judge Rodgers added, “When you have the opposing party senator come and introduce you at your hearing, it speaks volumes. Many things speak volumes about Senator Nelson, but this really, personally, speaks volumes to me about how much he cares about community. He knew that I was the local pick, but also that politics didn’t play a part in it. It was about getting a judge on the bench with the qualifications to do the job. Politics does not carry the day at all. Thank you.”