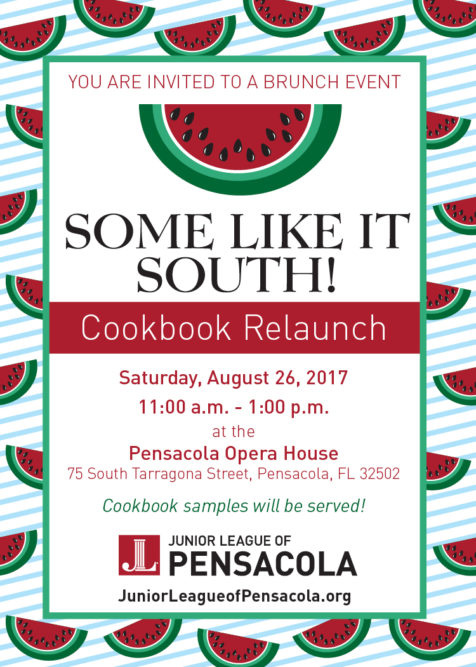 To celebrate over 30 successful years of delicious southern cooking, the Junior League of Pensacola has released the 10th printing of “Some Like it South!”, the timeless cookbook that exemplifies Gulf Coast living and entertaining at its best.

Originally published in 1984, “Some Like It South!” is more than just a collection of recipes. The book boasts a collection of rich Southern recipes and ideas for entertaining that exemplify the hospitality and diversity of the people of the Pensacola Bay Area. A staple in local kitchens for decades, the book has been out of print and unavailable for purchase in recent years.

A brunch relaunch event will be held Saturday, August 26, from 11:00 a.m. to 1:00 p.m. at Pensacola Opera House located at 75 South Tarragona Street. The event is open to the public. Refreshments prepared from recipes in the cookbook will be served, and copies will be available for purchase for $21.95 plus tax.

“‘Some Like It South!’ is a user-friendly cookbook,” noted Betsy Daniels, former Chapter President of the Junior League of Pensacola and the former Cookbook Chair who oversaw its inception and original publication.

“If you are an experienced cook, you will enjoy its collection of timeless go to recipes. If you are a beginner, it is the perfect introduction. You can learn how to make the kinds of recipes people like and you know you’ll be successful when you cook them. That is one of the reasons it has remained in demand for so long — it is full of classic, usable, and familiar recipes that are fun to make and that everybody enjoys,” observed Daniels.

The reprint coincides with the Junior League of Pensacola’s 61st anniversary and Charter Day celebration on August 29.

“The Junior League of Pensacola has been serving the local community for 61 years. “Some Like It South!” is an important part of the organization’s history. If you are from the area, you likely grew up with “Some Like It South!” on the shelf in your kitchen. We are thrilled to be able to share the book with another generation of families,” announced Dannon Byrd, Chapter President of The Junior League of Pensacola.

“I’m proud of our chapter’s history,” said Byrd, “and I’m excited about how we’ve evolved to represent the diverse and modern women of today. We have a lot to celebrate this year.”

For more information on how to attend the relaunch party or to purchase “Some Like It South!”, visit http://juniorleagueofpensacola.org or call the Junior League office at (850) 433-4421.