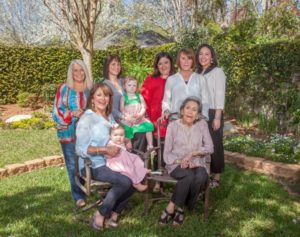 Press Release: The Kugelman Family Foundation has committed $150,000 to the YMCA of Northwest Florida toward the construction of a new facility in downtown Pensacola.

The family’s gift continues their legacy of giving back to local community organizations, a practice that the late Jack Kugelman learned from his parents and instilled in his own family decades ago. “We’ve always felt as a family that we were very fortunate to have something to give,” Jane Kugelman said. “I like giving, and I always have.”

Four generations of Kugelmans recently gathered at the family matriarch’s home in East Hill to express their support of the Y project and their love of community involvement. “My grandfather wanted to give locally because he was so proud of Pensacola,” said Jane Lauter, granddaughter of Jack and Jane Kugelman. She said the family’s gift to the Y was a natural fit because the organization’s goals go hand-in-hand with those of the family’s foundation. “For us, it was about how the Y gives back to the community,” she explained. “There aren’t enough opportunities for children to participate in all that the Y does. We love how the Y speaks for Pensacola.”

The family sees giving as a way to support local nonprofits and to sustain their family’s legacy. With a family of four daughters, the name would otherwise die out, Jackie Kugelman said. Giving is a way to build up the community and keep the Kugelman name alive in Pensacola, she said.

“The Kugelman family’s gift is yet another example of the widespread support we are so fortunate to have earned for our project,” said Board Chair Jon Kagan. “We are especially grateful for this gift and hope it will inspire other philanthropic families in the area.” Kagan added that the Y is about 75% of the way toward its goal for the new branch. Groundbreaking is slated for later this year.

Northwest Florida is served by the Downtown, Northeast, and Pullum Branches of the Y. Annually, the local Y reaches more than 12,000 children and adults in wellness, childcare, sports, camp, aquatics and community outreach programs. The Y’s total community benefit in 2014 totaled more than $639,000 in financial assistance and mission impact activities.