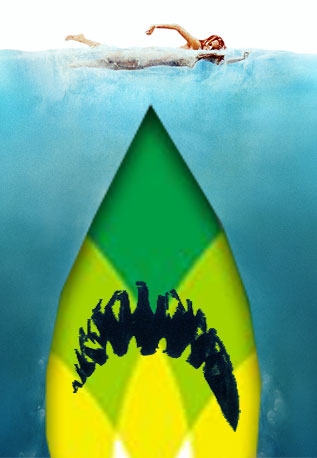 As of May 18
UNDERWATER
—-Subtitle “Don’t expect it to be stopped any time soon.”
.
The riser insertion tube tool (RITT) containment system is estimated to be collecting and carrying about 2,000 barrels a day (b/d) of oil to flow up to the drillship Discoverer Enterprise on the surface 5,000 feet above. Produced oil is being stored on the drillship while produced gas is being flared. Note: BP doesn’t state what percentage the 2,000 bbls are of the total amount leaking. Could be as little as 8 percent.

It will take some time to increase the flow through the system and maximise the proportion of oil and gas flowing through the broken riser. Note: Not very reassuring.

Plans continue to develop a so called “top kill” operation where heavy drilling fluids are injected into the well to stem the flow of oil and gas, followed by cement to seal the well. Most of the equipment is on site and preparations continue for this operation, with a view to deployment in the next week or so. Note: I predict it will be later than next week.

Work on the first relief well, which began on May 2, continues. The DDII drilling rig began drilling the second relief well on May 16. Each of these wells is estimated to take some three months to complete from the commencement of drilling —meaning August 2 and August 16. Note: The second well was started until two full weeks after the first.

ON THE SURFACE
—Subtitle “How lot of action, few results”

Over 750 vessels are involved in the response effort, including skimmers, tugs, barges and recovery vessels. Note: This only 50 more ships than we were told two weeks ago.

Intensive operations to skim oil from the surface of the water have now recovered, in total, some 158,000 barrels (6.6 million gallons) of oily liquid. (Note: BP isn’t saying crude oil, so this is a mixture of saltwater, oil and dispersant). The total length of boom deployed as part of efforts to prevent oil reaching the coast is now more than 1.7 million feet, including over 400,000 feet of sorbent boom. (Note: BP doesn’t state how much is ocean boom and the sorbent boom is less than 25 percent of what has been deployed)

In total over 19,000 personnel from BP, other companies and government agencies are currently involved in the response to this incident. So far 15,600 claims have been filed and 2,700 have already been paid. (Note the low percentage of payments: 17.3 percent)

On 17 May, BP announced further grants, totalling $70 million, to Florida, Alabama, Louisiana and Mississippi to help mitigate the economic impact of the oil spill (Note: These grants were for advertising, not clean-up) Including these grants, the cost of the response to date amounts to about $625 million, including the cost of the spill response, containment, relief well drilling, previous grants to the Gulf states, settlements and federal costs. ( Note This less than 12 percent the net profits for BP in the first quarter of this year.)