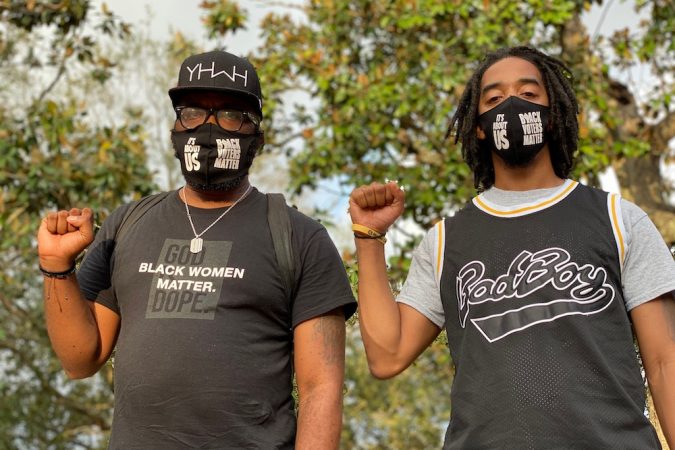 In this week’s print issue of Inweekly, two local organizers discussed efforts being made in the region to empower Black voters. But the discussion with Jamil Davis, North Florida regional organizer for Black Voters Matter, and Charles Williams, organizing lead for Dream Defender’s Pensacola chapter, ventured beyond the topic of this year’s election.

The following is an excerpt from the interview with Davis and Williams in which they address challenges surrounding fully-realizing an amendment voters passed in 2018 which restored voting rights to felons, as well as recent legislative proposals from Florida Gov. Ron DeSantis that take aim at protest organizers and municipalities considering reallocating law enforcement funds.

DeSantis’s proposals address the protest tactic of blocking a roadway and also provides protections for drivers who encounter protesters.

Davis and Williams feel the governor’s proposals are a direct response to a local event earlier this year when protesters blocked the foot of the Pensacola Bay bridge to demand that Mayor Grover Robinson appoint a member of Dream Defenders to his citizen-police advisory committee. During the incident, a driver proceeded through the blockade, carrying a protestor across the bridge. Though the Pensacola Police charged the protestor, but the state attorney’s office later dropped the charges.

INWEEKLY: Can you speak a little bit about operating in a place like Florida, where DeSantis just introduced his proposal regarding protests and the challenge being made to the funds used to pay off any kind of fees associated with voting for felons? Do you feel like you’re somewhat behind enemy lines?

CHARLES WILLIAMS: There’s always going to be—one step forward, they’re going to try to push us two steps back. That’s kind of always been the thing, but it’s always up to us to try to continue to fight forward.

But it’s disappointing, it’s unfortunate. The people spoke emphatically about what they wanted, but they have a leader who doesn’t want to actually go along with it and abide by it. It’s disappointing in a lot of ways, even when it comes to your own representative wanting to try to suppress that particular vote by investigating and doing all these other things that pretty much just tries to take away our voice. You know what I’m saying?

They really want to take away our voice, so that’s what we fight for and what we try to push to keep to use and collectively let them know that we have the power to make changes in all those positions and that’s what we need to continue to do.

JAMIL DAVIS: They give mob bosses and gang leaders federal RICO charges. So, Governor DeSantis is basically saying that you’re trying to put people who are just essentially saying that the very lives of Black men and women and LGBTQ and trans people in this country matter.

You’re saying we’re on the same level as mob bosses and gang leaders and that us exercising our First Amendment right and causing civil disobedience in this country should be considered a second and third degree felony, and we should be hit with federal RICO charges.

And if any city in the state of Florida decides that they want to divest from their police department’s budget and reallocate those funds into our communities, you’re basically saying, ‘I don’t know how you going to do it, because we’re going to cut off your state funding”—which, if we know the city of Pensacola, a good portion of their money for their city budget comes from the funding that they get from the state. So, now you put them in an even worse position if they decided that that was something that they wanted to do in the future.

And we are using the greatest leniency that we know how, through marching, through protesting, through using our voice, by taking over city council meetings at city hall, through sitting down and actively having these meetings with city government officials to make them see our way.

CHARLES WILLIAMS: I will say, one point regarding that DeSantis proposal as well—when I read it, what I kind of took away was he’s almost trying to legalize what happened to Heather Hyer in Charlottesville several years ago when a car fatally killed her, running into a group of protesters blocking the street. And he is trying to say that that is pretty much legal to do, in essence. So, you know, that’s something I can’t fathom to understand, how you can even propose something of that nature?

INWEEKLY: Well, and obviously that would have impacts on what happened here, both the car issue as well as the road blockage where Hale (Morrissette) got her seat on the committee.

CHARLES WILLIAMS: Yeah, exactly. That’s somewhat a direct attack on what we did.

JAMIL DAVIS: I feel like that particular piece was a direct shot at the thing that we did on the bridge. Because people recognize the Chappie James Bridge, that’s one of the busiest bridges, not just in this city, but this state. It sits right on U.S. 98, which is a highway that is utilized by freight trucks and trucks that are carrying important cargo to get that stuff distributed from state to state. And we essentially by taking over that bridge, we stopped production of capitalistic goods from being distributed in this country, for 30 to 45 minutes.

So, it’s like, ‘Oh, ok, so that’s how y’all wanna play this? Fine, cool, you do it again it’s federal RICO charges. And if the guy who ran out over it does that again, he’s not liable for what it is that he did.’

That’s heinous, that’s out of line. You’re basically giving people the green light to handle protesters how they will. And as we all know, there’s a lot of provocateurs, who come to these protests and cause unnecessary violence or violent actions for no reason at all other than to give our protests a negative light.

So, if somebody comes in that’s not even part of our collective and causes trouble and either one of us are the organizers of said protest we’re facing RICO charges for something that someone who might possibly be a supporter of the current governor in office came and did.

CHARLES WILLIAMS: Just trying to sabotage anything that we have going insofar as positivity, you know what I mean? That’s pretty much what it would be.

It’s just like has to stop and we need to be doing more than, you know, doing promotional campaigns and doing endorsements. It’s pretty, it’s cute, it’s nice to see all the support, but we also need substantial legislation and leadership that’s actually wanting to progress past draconian and inhumane ways and laws to oppress us and to allow a certain sector to do harm to us with impunity. So, just a whole lot of that comes into us just continually screaming out and let that be known until everyone understands that this is the best for all.

If it’s found out that the person that’s a city or state employee is an active participant of a protest that went awry, they could lose their job and/or benefits; they could lose their tenure if they have a city or state job. So, now you’re basically saying you want to take away people’s livelihood, how they feed their families, because you disagree with a measure that was taken in order to gain our freedom.

CHARLES WILLIAMS: Being patriotic and doing everything that our forefathers were doing, as far as trying to make sure that the Constitution that we live by applies to all of us—that’s pretty much the bottom line, because we know that it wasn’t built with us in mind. And, of course, it shows that within statistics and everyday life that we see over and over again. That’s why it’s crazy that we see that people are just trying to come against us, but we’ve always seen that.