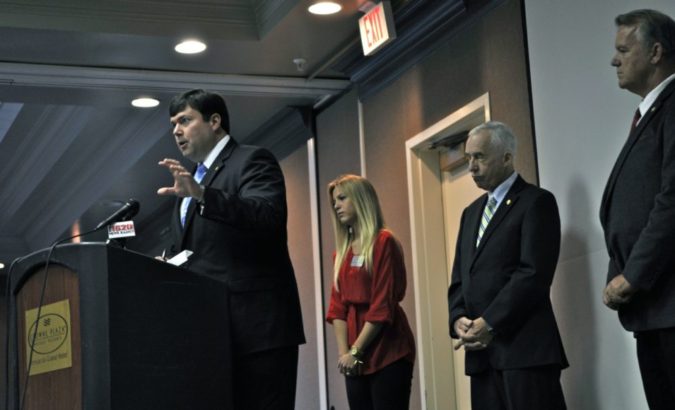 Earlier this month, state legislators from northwest Florida visited Pensacola for a bite to eat and a sit-down with the local business community.

“There’s no shortage of folks in Tallahassee there to express their interests,” said Pensacola Bay Area Chamber of Commerce President and CEO James Hizer. “We need to be among them.”

During their addresses, the lawmakers stressed that getting attention in Tallahassee could be an uphill battle. The northwest is often in competition with the rest of the state, namely south Florida.

“We are going to be under represented for some time,” Broxson told the lunch crowd. “Many in the legislature consider the Panhandle to be a beggar portion of the state.”

Brown said that Sen. Evers—as well as the rest of the senate—will be largely focused on the budget and redistricting.

“Those are going to be the two main focuses,” he said.

Rep. Ford said that area legislators need to work together to get the biggest bang for the buck.

“If you look, you’re gonna see us co-sponsoring each other’s bills,” he said. “Because that’s how you get it done in Tallahassee.”

Ford said he is concentrating on a bill that would pave the way for oil drilling on public lands, as well as one which would forbid cash payouts for recyclable materials. Brown said that Evers would like to see the corporate income tax reduced, and Ingram spoke about an effort to crack down on “hybrid gangs.”

The state lawmakers also heard from a number of locals. A Pen Air exec made a pitch for less regulation. Clyde Mathis, director of the Port of Pensacola, told the legislators about wanting to run power to the port so that Offfshore Inland’s operations wouldn’t need to run on diesel.

Jules Kariher, of The Strategy Group, addressed health care issues. She explained to the legislators how 40 million uninsured people three years ago had grown to its current 120 million people living without health insurance.

“There’s always sick people—in fact, there’s more sick people when the economy is down,” Kariher said, laying out the numbers. “That’s just a real statement of where we are in our economy and where people are in their lives.”

Kariher urged the lawmakers to resist cutting medical programs when looking to trim the budget.

At the end of the luncheon there was a Q and A session. Jill Broxson, of the Gulf Breeze  Area Chamber of Commerce—and Rep. Broxson’s daughter—moderated.

The question evoking the biggest reaction from the luncheon crowd was pitched by News Radio 1620’s Rob Williams—he told the state lawmakers that he didn’t want to see a toll on the three-mile bridge.

“You can judge by the applause,” Williams said, as the crowd gave the notion an ovation.

“I’m absolutely opposed to it,” Ford assured the gathering.