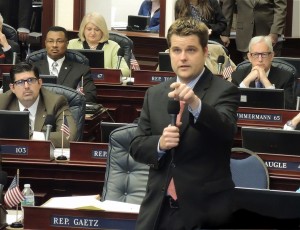 Two key lawmakers have proposed allowing terminally ill patients to obtain medical marijuana to help grapple with pain, the latest twist in a nearly two-year debate about how to address the high-profile — and emotionally charged — issue.

Sen. Rob Bradley, R-Fleming Island, and Rep. Matt Gaetz, R-Fort Walton Beach, held a news conference to announce the proposal, which will be considered during the 2016 legislative session. It comes as state health officials continue trying to carry out a 2014 law allowing limited types of cannabis and as a potential ballot fight looms next year over broader legalization.

Bradley said lawmakers can’t “put our head in the sand” on the medical-marijuana issue, with polls showing that a majority of voters favor making cannabis available to patients.

“The people in our communities who care about cannabis reform, who want to be able to die without being jacked up with opiates and without being in excruciating pain are visiting their legislators,” Gaetz said. “They are making phone calls. They’re sending emails, and it’s working.”

The proposal (HB 307) piggybacks on a law passed earlier this year that allows terminally ill patients to gain access to experimental drugs that have not been approved for general use by the U.S. Food and Drug Administration. That law, dubbed the “Right to Try Act,” is limited to patients who have terminal conditions and requires that they get approvals from two physicians.

Those same conditions would apply to the medical-marijuana bill proposed by Bradley and Gaetz.

Bradley and Gaetz helped spearhead an effort in 2014 to pass a law that allows some patients, such as children with severe forms of epilepsy, to obtain limited types of cannabis that purportedly do not get users high. But those products, which are low in euphoria-inducing tetrahydrocannabinol, or THC, and high in cannabadiol, or CBD, still are not on the market, as the Florida Department of Health ran into legal challenges over regulations and as a licensing process continues for nurseries.

Unlike the 2014 law, the new bill would not be limited to non-euphoric medical marijuana. But it would use the same regulatory structure designed to carry out the 2014 law, including relying on nurseries in five regions of the state that will be awarded licenses to grow, process and dispense cannabis.

Lawmakers will consider the bill as they face the prospect of a renewed drive to pass a constitutional amendment in November 2016 for broader legalization of medical marijuana. The drive is led by prominent Orlando attorney John Morgan and comes after a similar ballot proposal narrowly failed in 2014.

Backers of the initiative still need to get Florida Supreme Court approval of their proposed ballot language and submit enough petition signatures to take the issue to voters. Gaetz said the newly filed bill is not about trying to fight the proposed constitutional amendment, though lawmakers often argue that issues such as medical marijuana should be dealt with in the Legislature.

“This is a job for legislators to do, not the blunt instrument of a constitutional amendment,” Bradley said. “But we kind of lose that argument, and rightfully so, if we just say that but then don’t do anything about it and not address legitimate concerns that are raised to us by our constituents.”

Polls have consistently shown that a majority of voters back at least the concept of allowing medical marijuana. A University of South Florida survey released this week put support at 55 percent.