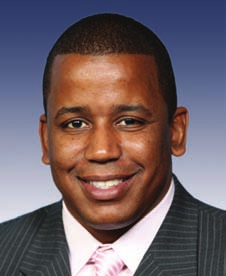 Congressman Kendrick Meek, the Democratic candidate for U.S. Senate, stopped by the IN offices for a few minutes before his meeting with the PNJ editorial board. Meek held an open forum last night on offshore drilling and the BP oil spill. Today he is headed to the joint command center in Mobile, Ala.

“I enjoyed getting information from everyday people,” Meek told me, “so that I can see what is missing in the federal response.”

Meek believes that BP is deliberately “slow walking” the claim process and is behind a whisper campaign of uncertainty. “They are trying to confuse victims on their rights.” The more the congressman talked about what he heard from the public, small business owners and fisherman, the more anger could be heard in his voice.

He said that he planned to go the White House when he returns to Washington.

“We need to make a decision. Are going to deal with the disaster on the backs of the people or government? These people were already hurting before the oil spill. They are too small to fail.”