Communities of microbial organisms — species such as nematodes, protists and fungi — on beaches along the Gulf of Mexico changed significantly following the Deepwater Horizon oil spill in April 2010, research from the University of New Hampshire’s Hubbard Center for Genome Studies (HCGS) and partners found. The findings, which analyzed marine sediments from five Gulf Coast sites prior to, and several months following shoreline oiling, are published in the June 6, 2012, issue of the journal PLoS ONE.

The researchers sampled sites around Dauphin Island, Ala., and Grand Isle, La., just after the Deepwater Horizon spill began but before oil reached the shore, then again several months later, in September 2010.

“In that short time period, we saw a drastic change in the microbial community,” says lead author Holly Bik, a postdoctoral researcher at UNH’s HCGS when the research was conducted, now at the Genome Center at the University of California, Davis. “We were shocked at how drastic the change was, pre- and post-spill.”

Bik and senior author W. Kelley Thomas, director of the HCGS, as well as collaborators from Auburn University and the University of Texas, San Antonio, found that the communities of microbial eukaryotes (organisms not visible to the naked eye whose cells contain nuclei) in the sediments shifted dramatically from highly diverse communities dominated by nematodes – “what you would expect on a beach,” says Bik — to an almost exclusively fungal community.

What’s more, those post-spill fungi seem to have an appetite for oil. “The fungal taxa that were there were previously associated with hydrocarbons,” Bik says, noting that the group of fungi sampled post-spill from the Grand Isle sites are suspected to utilize hydrocarbons and thrive in hostile, polluted conditions that appear to be intolerable for other marine fungi.

The researchers used two parallel methodologies – high-throughput gene sequencing to sort the organisms into “piles” by their DNA, and an under-the-microscope taxonomic approach — to evaluate the communities pre- and post-spill. In the taxonomic data examining nematodes, researchers found that the post-spill samples were dominated by more predatory and scavenger nematodes as well as juveniles, suggesting.

While nematodes and fungi are hardly charismatic and are unlikely to turn up on the dinner table, these little-understood yet abundant organisms are nonetheless important. “They underpin the entire ecosystem,” Bik says. “If you knock out the base of the food pyramid, you’re not going to have food higher up in the food chain.” Further, they are also important for nutrient cycling and sediment stability.

The researchers’ findings also point to the possibility of lingering but hidden effects of the spill, which is the largest accidental marine oil spill in the history of the petroleum industry.

“If you turned up at the beach in September and looked around, you would have had no idea there was an oil spill,” Bik says. “Yet our data suggest considerable hidden initial impacts across shallow Gulf sediments that may be ongoing.” Ongoing research and sampling will aim to determine whether fungi are thriving and persisting long-term and whether the shift in communities is an ephemeral, seasonal or a more permanent phenomenon.

The use of high-throughput sequencing approaches to characterize changes in microscopic eukaryote communities is a cutting-edge technique for tracking environmental disturbance. “The development of these genomic tools provides a detailed understanding of the biological consequences of such environmental disasters and is the first step toward mindful approaches for mitigation and remediation of this oil spill and those we will face in the future,” says Thomas, who is the Hubbard Professor of Genomics at UNH.
The paper, “Dramatic shifts in benthic microbial eukaryote communities following the Deepwater Horizon oil spill,” is available to download from PLoS ONE here: http://dx.plos.org/10.1371/journal.pone.0038550. In addition to Bik and Thomas, co-authors were Kenneth Halanych from Auburn University and Jyotsna Sharma of University of Texas, San Antonio.

This research, which is ongoing, was funded through the National Science Foundation’s RAPID program for quick-response research on natural human-caused disasters and similar unanticipated events. More information about the grant is available here: http://www.unh.edu/news/cj_nr/2010/sep/bp14oil.cfm 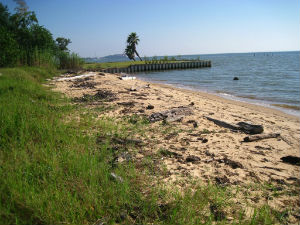