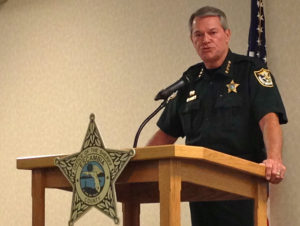 Ceola Walker has been searching for answers since Saturday. That’s when Roy Middleton, her 60-year-old son, was shot by sheriff deputies as he tried to retrieve cigarettes from the Lincoln Town Car parked in the driveway.

“I don’t have an answer for how that could have gone down like that,” Walker said this afternoon. “How a man can get shot at his own house, police shooting so many times, trying to kill him. I don’t understand.”

Escambia County Sheriff David Morgan gave a press conference later in the afternoon. He talked about the training sheriff officers receive, and detailed the circumstances surrounding the weekend shooting. But he also had a question.

“… how did it go so horribly wrong?” Morgan asked at the press conference.

That’s the question the Florida Department of Law Enforcement will try to answer. As with all officer-involved shootings, the FDLE is conducting an investigation.

Morgan began the press conference by playing an audio recording of a 911 call from a neighbor. The caller—who’s identity is not being released—reports an attempted car jacking at 218 Shadow Lawn Lane.

“He keeps ducking down underneath the dashboard, trying to reach for something,” the caller tells the dispatch operator.

Several deputies are dispatched to the residence. The caller walks out into his front yard and waits for their arrival as he watches the man in the car in his neighbor’s driveway.

“This is crazy,” he tells the operator. “I’m standing out here in the middle of the yard talking on the phone, and he’s not even noticed me.”

According to the incident report, three officers arrived on the scene. They parked down the street and approached the residence.

As the officers parked away from the house, there is no dashboard video of this incident. The only known non-officer witness, the 911 caller, retreated indoors when the gunfire began.

Deputy Jeremiah Meeks, on the job two years, was the first to reach the driveway. Sergeant Matt White, a 14-year veteran, was next.

The third officer, Wayne Wright, was still making his way to the driveway when the shooting began.
“Sergeant White was slightly ahead of me, and as I got closer to the residence I observed Deputy Meeks near the end of the driveway,” Wright wrote in the report. “I then heard verbal commands being shouted to have the subject get out of the vehicle and show his hands. Deputy Meeks and Sergeant White then both fired their weapons.”

Middleton’s mother pegs the bullet-count at 17. She’s got holes in her car and house.

“They were putting down little numbers for the bullets and I saw’em put 17, I think,” Walker said. “There was a lot of them.”

“Within seconds,” the sheriff said, adding that the officers carry .40 caliber Glocks, with a 17-round capacity.

Morgan attributed the number of shots fired to “officer anxiety.” But he also said the officers were reacting to Middleton, who he described as not responding to commands and making a “lunging motion” towards the car’s middle console. He also noted that the officers saw a “metallic object” in the man’s hand and that they fired “fearing for their safety.”

“There’s numerous commands going throughout this incident,” Morgan said. “You’ve got to remember, everybody’s ramped at this point.”

The sheriff declined to elaborate on the “metallic object,” citing FDLE’s ongoing investigation, other than to say that two objects were recovered on scene.  The incident report cites neither a “metallic object” or a lunge toward the mid console of the car; Wright does state in the report that he “observed a cell phone on the ground between [Middleton] and the vehicle.”

The gunshots are what woke up Walker. For a few sleepy seconds she recalls thinking it might be her son locked out of the house and rapping his fingers on her window. Then she knew it wasn’t that.

“I could hear them giving him orders, and my son saying he’d been shot,” Walker recalled.

According to the incident report, the officers could not see Middleton’s right hand as he lay on the ground. At the press conference, Morgan explained that the victim was laying on his hand.

The officers continued giving Middleton commands to show both hands, which he eventually did. As his injuries are being assessed, the man tells officers it’s his house—a fact verified by the Florida driver’s license in his back pocket—and makes a “spontaneous statement to the effect that he thought it was his neighbor playing with a flashlight.”

“He thought it was a neighbor playing a joke,” Morgan explained at the press conference.

When the mother approached the front door, officers told her to stay inside the house. She said today they had yet to contact her with any explanation or apology.

“They haven’t contacted me at all,” Walker said, adding that she was interested in what would be revealed at the press conference.

Sheriff Morgan did apologize to the shooting victim and his family during the press conference, but also stressed that the officers’ actions were “dictated” by the actions of Middleton. He called reports that Middleton had been shot while backing out of the vehicle with his hands raised—an assertion the victim has made—“erroneous,” and said the press conference was intended to “clear up, as always, some rumors that are coming in.”

The sheriff also provided the media with a tally of the total calls-for-service in the area of the incident—1,808 calls for the year to date—and said that his office attempts to get officers “connected to the community as much as possible, with an understanding of who we deal with in the community.”

Morgan also noted that this incident had attracted outside attention.

“We get concerned when Facebook lights up across the nation,” he said.

For that, his mother is thankful.

“I know one thing,” Walker said. “The lord took care of him. The way they fired those bullets, they could’ve hit him in the head, the chest.”