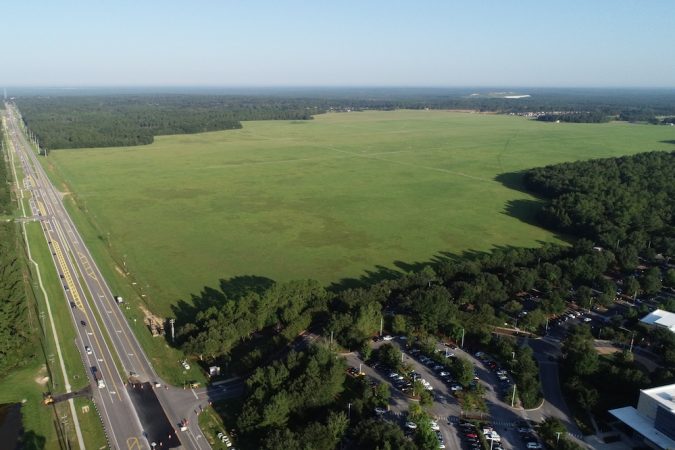 Last week, Inweekly requested emails between Navy Federal Credit Union and DPZ CoDesign and its OLF-8 project team members. The Escambia County Commission hired DPZ to develop a master plan for the 500-plus acre site in Beulah. Navy Federal agreed to reimburse the county for DPZ.

Originally, DPZ tried to charge us $1000 for the emails but eventually reduced the bill to $150, after the county attorney intervened.

The emails show how deeply Navy Federal employees have been involved in the Beulah Coalition and lobbying the commissioners on the behalf of the DPZ master plans – all except for the commerce park option.

“The short version of our ask is that a plan for OLF-8 includes ‘something for everyone,’” Pearson wrote. “We understand the driving force for the county is the creation of good-paying jobs. However, those of us who live or work in Beulah understand the need and unique opportunity to transform the community and attract amenities and quality of life improvements that will benefit all.”

He added, “We will be more than happy to assist in the effort to obtain public input on this process. We understand the only way this project will be accepted is if the community feels they have ownership in the process.”

The charrettes for public input were held in October. According to the spreadsheet provided through a public record request, 237 people participated in the meetings, of which 28 didn’t live in Escambia County according to the zip codes provided. Only 104 of the participants live in the Beulah zip code, 32526. Of those 104 Beulah residents, 10 gave navyfederal.org email addresses.

According to DPZ team emails, Pearson and Navy Federal senior leaders received a draft copy of the market analysis as early as Aug. 14, 10 days before the daily newspaper published the report and three weeks before it was presented to the county commission.

After the News Journal published an article on the Downtown Tech Park not receiving any offers on Nov. 13, Pearson sent an email circulated among the DPZ team bashing FloridaWest.

“If our community is struggling to fill a two-acre lot in the bustling downtown, what kind of market will there be for hundreds of acres in Beulah that, like the tech park, is designed to attract high wage jobs?” wrote Pearson. “Travis, have you been able to connect with the rest of the DPZ folks to discuss a virtual meeting with the Beulah Coalition in the next week or so”

On Dec. 8, DPZ gave the county commission an update of the OLF-8 project. Before the meeting, Navy Federal leaders got a private briefing.

Travis Peterson of Impact wrote Pearson on Dec. 1, “We’re doing quick briefings with BOCC members on the OLF-8 plans, and wanted to make sure we offered the team at NFCU the same. Would you and/or some of the NFCU senior leadership want an overview prior to the presentation to the BOCC next week?”

“A few things that might be helpful in your reporting.
1) The case was made that there isn’t enough land somehow for econ dev in Escambia County. These webpages seem to indicate otherwise.
https://www.floridawesteda.com/business-parks/other-business-parks
https://www.floridawesteda.com/business-parks/the-bluffs-industrial-campus
2) The RFP from the county clearly states that this project is to balance the needs of jobs with the needs of the Beulah community. This is the work that the BOCC approved, and that the DPZ team is contractually bound to fulfill.
See “Purpose” on this document.
3) Of the 270+ people who voted in the survey in the Charrette, only 18% voted for the Commerce park plan. That means 82% supported a mixed-use plan with residential, retail, office and commerce. (See summary slides here)”

Arnold did not use Peterson’s talking points in her article. However, on Sunday, Dec. 12, the PNJ’s editorial board went after the county commission—”Escambia commissioners embarrass themselves and insult citizens of Beulah.”

Leading Up to January Meeting

In mid-December, Pearson notified Impact and fellow Beulah Coalition members that they had been added to the Nature Trail Homeowners Association’s agenda.

“We are in the process of setting up a Facebook group for people interested in learning more about us or being involved in moving our goals forward to stop a commerce park, actually a commerce park plan, to be more specific,” she said. “I think you outlined our goal clearly last night.”

Blackwell followed up with another email on Jan. 11: “Just talked with Bill Pearson about our organization going forward and he agreed that it should fall out like this:

– We continue as the Beulah Coalition, adding a few good candidates as they emerge during this effort. I will continue to help groups get started as I can, but we need to work at a different level than the groups.

– Nature Trail can continue to try to bring the subdivisions together, be a coordinating point for subdivision actions. But the individual subdivisions will be autonomous for the most part, making a difference in the ways that they choose. (No top-down orders from Nature Trail).

– I will help residents who are not in a subdivision and want to form groups, like the ones on Frank Reeder Road. And if someone who actually lives in a subdivision wants to work with a non-subdivision group, that’s fine, too. They will represent just themselves at that point.”

She added, “Our main goal at this point is speakers for the next BCC meeting public forum – 8:30 a.m. Jan. 21, next Thursday. We need to show that we are organizing and growing and will bring it to them. Letters to the editor would be great, too, to publicly embarrass them.”

DPZ project manager Marina Khoury tried to get Blackwell to tone down her message.

“Instead of ‘no commerce park,’ you should consider ‘Not only a commerce park’ as having high paying jobs on the site should be welcome,” Khoury wrote. “But the site is too large to only accommodate amenities and office jobs with no housing.”

She advised them how to lobby for the DPZ master plans. Khoury told them to ask the commissioners to consider how much land is reasonable to set aside for commerce only.

She told Blackwell, “Advocate for some housing on the site too, as if not here, where else in Beulah?”

As I reported, the Jan. 21 didn’t go well, and the News Journal wrote another scathing editorial berating the county commission.

DPZ will be back before the county commission tomorrow morning at 9 a.m.

This morning, I wrote Bill Pearson and asked when he formed the Beulah Coalition and how would  he describe the group.

I told him, “It appears to be a political arm of Navy Federal Credit Union with you editing their materials and helping them lobby the Escambia County Commission.”

Pearson has not replied.

Editor’s note: Navy Federal can work with a citizen group, even have its employees lead it, but the public should know it. The credit union has been supported by millions of local, state and federal tax dollars.  Be transparent.

Everybody wants mixed uses at OLF-8. The housing has little support though.

I still have a problem with DPZ treating their work like a political campaign.