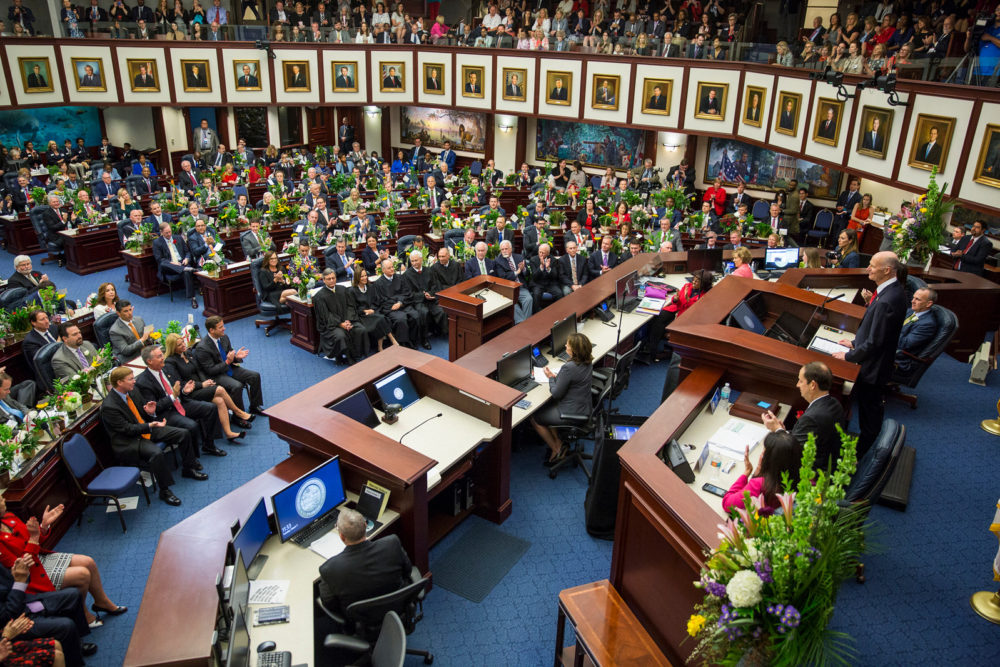 Gov. Rick Scott and nearly every strong mayor in the state of Florida give annual speeches about the status of their governments. Pensacola Mayor Ashton Hayward is the exception. His last State of the City address was in October 2013, followed up with an all-access press conference.

The “State of…” addresses set the tone for the government and lets the voters understand what initiatives are being proposed. The public can see the evolution of policies from year to year.

See how the News Service of Florida previewed Gov. Rick Scott’s 2018 State of the State:

THE CAPITAL, TALLAHASSEE, January 8, 2018……… Gov. Rick Scott will deliver his eighth and final State of the State address Tuesday on the opening day of the 2018 legislative session.

It’s an important tradition as it gives the governor a chance to offer his assessment of the state and to outline past accomplishments and his goals for the 60-day session.

But like most opening-day speeches, it will fade quickly into obscurity. It happens to all governors, with a few notable exceptions like the 1991 speech when Gov. Lawton Chiles waved a three-legged wooden stool, making a point about the governor, the House and Senate working together.

The opening-day speech diminishes in importance when compared to the governor’s actions at the end of the session, when he must decide what bills to sign or veto and how he will handle his line-item veto power over the annual state budget. Those decisions have a more lasting impact.

Nonetheless, looking back at Scott’s seven prior speeches offers a window into his evolution as the leader of the nation’s third-largest state and provides an outline of his political legacy. Scott cannot run again in November because of term limits.

Elected as a tea-party conservative in 2010, Scott, a former business executive who had never held a political office, has made job growth the central tenet of his governorship, starting with his campaign slogan of “Let’s Get to Work.”

Tax cuts have also been a major theme. Scott fell short of some his more ambitious proposals, including elimination of the state corporate income tax. But he can cite more than $7 billion in cumulative tax cuts during his two terms.

Other popular themes in his annual speeches have included a reduction in overall state debt, which has fallen more than $5 billion since 2010, and opposition to college and university tuition increases.

After backing cuts in education spending during his first year in office, Scott has also been a consistent champion for budget increases for the kindergarten-through-high-school system as well as state colleges and universities.

Here is a look at Scott’s State of the State speeches through the years:

Newly elected as a fiscal conservative ready to take on government spending, Scott’s first speech was heavy on austerity, tax cuts and a pledge to take on the “status quo.” His budget included a plan to cut per-student funding in public schools by 10 percent.

His first speech drew supporters, including tea party activists, as well as protesters worried about the impact of spending cuts and Scott’s plan to revamp the state pension program.

QUOTE: “The first step to better times is acknowledging that government cannot afford what some have come to expect. Doing what must be done will not make me `most popular,’ but I’m determined to make Florida `most likely to succeed.’ ”

Scott struck a more conciliatory tone in his second speech, promising to work with lawmakers and push for more money for schools.

Scott advanced more tax cuts and talked about the state’s success in job creation. “It’s working,” he said. But in a policy reversal, Scott also called for an expansion of the state’s Medicaid program under the federal Affordable Care Act, an initiative that he later abandoned.

QUOTE: “I concluded that for the three years the federal government is committed to paying 100 percent of the cost of new people in Medicaid, I cannot, in good conscience, deny the uninsured access to care.”

Facing re-election, Scott never directly mentioned his opponent, former Gov. Charlie Crist, but he used the speech to outline problems he inherited, including a 12 percent unemployment rate, when he took office in 2011, following four years under Crist. He called for the elimination of motor-vehicle fees that were raised while Crist was governor.

QUOTE: “Let’s be honest about it — we inherited a terrible mess.”

It was a confident, newly re-elected Scott in 2015, returning to his themes of job creation and tax cuts. He even joked that the annual speech allowed him “to show off my world-renowned oratorical skills.”

QUOTE: “I believe we are the best place in the country and the world to make dreams come true. I call this Florida exceptionalism.”

In his sixth speech, Scott again had an ambitious tax-cutting plan, some $1 billion, as well as the creation of a $250 million economic-incentive fund.

QUOTE: “Now, we face the mighty task of keeping job creation going strong. … Now, we must set our sights even higher to make sure we do not fall back.”

Scott struck a somber tone in his seventh speech, acknowledging how the state had to deal with the mass shooting of 49 patrons at the Pulse nightclub in Orlando. Scott also defended his economic-development initiatives, which were under attack in the House.

QUOTE: “Our economy is booming, and I am glad that America elected my friend, Donald Trump, a businessman, an outsider like myself, as a president who is focused on growing the national economy.”