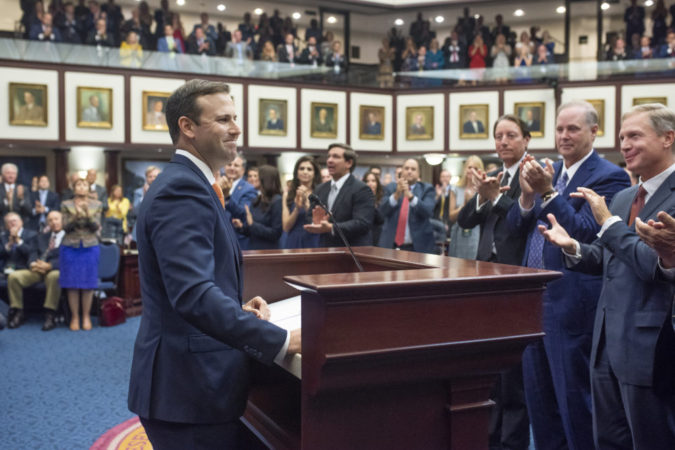 TALLAHASSEE — Moments after he was formally elected Tuesday to serve as Florida’s next House speaker, Palm Harbor Republican Chris Sprowls waded into issues such as bolstering the state’s finances and addressing climate change.

And he made clear he doesn’t think much of social media and the goings-on in Washington, D.C.

Sprowls, a 35-year-old attorney, will succeed Speaker Jose Oliva, R-Miami Lakes, after the November 2020 elections and will hold one of the most-powerful political jobs in Florida. He has long been positioned to become the next speaker, a move that was finalized Tuesday with a voice vote by House Republicans, who hold an overwhelming majority in the chamber.

Speaking to House Republicans, state leaders, family members and supporters, Sprowls outlined priorities that include addressing what he described as a “spending problem” in state government. As evidence, he said the $91 billion budget is growing faster than state reserves.

“We fund our wants at the expense of our needs,” Sprowls said. “We turn policy conversations into revenue conversations. We treat the state budget like it’s our own private charitable foundation to be used for the naming rights of buildings or programs. We can do better than this. We need to increase our reserves and create a new fund for disaster recovery. There is no excuse not to be prepared for the next storm or the next recession.”

While Sprowls followed a long line of Republican leaders in calling for spending restraint, he veered away from many members of his party in addressing the issue of climate change.

“We need to stop being afraid of words like ‘climate change’ and ‘sea level rise.’ Frankly, we do this too often as conservatives,” he said. “We confuse acknowledging a problem with acquiescing to a particular solution. We can recognize that our environment matters without banning our air conditioning or closing our supermarkets or scrapping our cars. Floridians aren’t interested in the utter nonsense of the Green New Deal. But they do want good jobs, clean water and ample, sandy beaches. They want to know we are working on practical ways to mitigate the risks of flooding in our coastal communities. We don’t live in Iowa. We live in a peninsula. We cannot afford to put our head in the sand and hope that the beach doesn’t disappear against a permanent rising tide. We shouldn’t be afraid of facts.”

When Sprowls takes over as speaker, his counterpart as Senate president is expected to be Trilby Republican Wilton Simpson. With Sprowls from Pinellas County and Simpson from neighboring Pasco County, they will bring clout for the Tampa Bay region and will follow recent House speakers Richard Corcoran and Will Weatherford, who were both from Pasco, and current Senate President Bill Galvano, who is from Bradenton and represents part of Hillsborough County.

But during his remarks Tuesday, Sprowls stayed away from local issues. He focused on the Legislature, while also criticizing Washington, social media, newspaper editorial pages and cable news.

“In the worst of times, there’s Washington D.C. A place that lives inside the centrifuge of the virtual world,” he said. “Where every piece of minutiae is dissected, analyzed and recycled by talking heads with the rabid fanaticism of grammarians fighting over the placement of a comma. There are no sights that are more telling or more depressing than a congressional hearing, where senators and representatives go not to listen, not to learn, but to hear themselves talk. The unfortunate erosion of our Constitution has removed most of the checks on federal power. Yet despite near unlimited authority, the federal government seems incapable of real action, unable to solve real problems, unwilling to make real reforms.”

Sprowls compared that with Tallahassee, where, he said, “actions matter more than words.” He described accomplishments in areas such as fiscal stability, higher education and transportation.

“You wouldn’t know any of that if you spent your time on social media or reading newspaper editorial pages,” he said. “But if you stepped out into the sunshine, you know that Florida is a destination — a place that people want to be, want to visit, want to work and want to live.”